What is a Saint?

“Here Rests a Humanist” is inscribed upon President Wahid’s tombstone in Indonesian, Arabic, English and Chinese.

Founder of a Global Movement

Established in 2014 by close friends and associates of H.E. KH. Abdurrahman Wahid, Bayt ar-Rahmah serves as a hub for the global expansion of NU operations and is moving—systematically and institutionally—to fulfill the late President’s vision of marshalling the concentrated energies of the Muslim world and the West, to help bring Islamic teachings into alignment with the modern world of freedom, democracy and human rights.

“A firewall against terror in the name of Islam”

“The Illusion of an Islamic State really scourged Wahhabism…. The [Muslim Brotherhood’s] Justice and Prosperity Party also fell victim and was gravely wounded [by the book’s publication].”

Blocking the Political Weaponization of Islam

Reaching Out to People of
Goodwill of Every Faith
and Nation

LibForAll works in seamless coordination with its sister organization, Bayt ar-Rahmah (“Home of Divine Grace”). Legally distinct entities, LibForAll and Bayt ar-Rahmah share a common vision, mission and overlapping governance. LibForAll is an independent, publicly-supported charity, whilst Bayt ar-Rahmah serves as a hub for the global expansion of the world’s largest Muslim organization—Indonesia’s Nahdlatul Ulama—under the direction of its spiritual leadership. 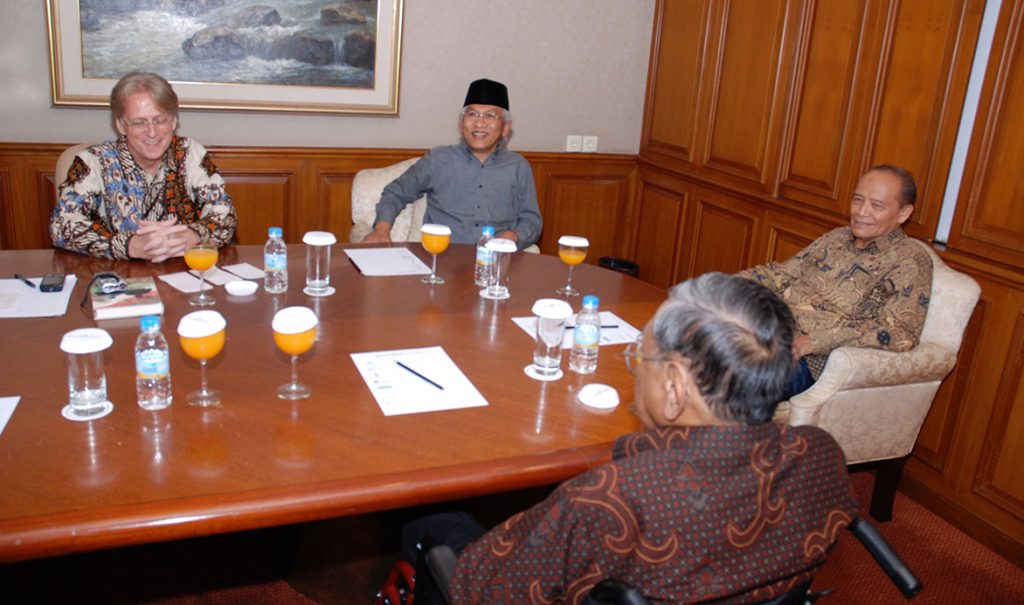 2009 meeting of LibForAll Foundation board members and senior advisers, which led to the founding of Bayt ar-Rahmah. Counter-clockwise from bottom right: H.E. KH. Abdurrahman Wahid, Indonesia’s first democratically-elected President and former Chairman of the Nahdlatul Ulama Executive Board; Dr. Ahmad Syafii Maarif, former Chairman of Muhammadiyah, the world’s second largest Muslim organization; KH. A. Mustofa Bisri, former Chairman of the Nahdlatul Ulama Supreme Council; and C. Holland Taylor, an expert on Islam and the Islamization of Java in the 15th and 16th centuries, who co-founded LibForAll with President Wahid

“LibForAll is a model of what a competent public diplomacy effort in the Muslim world should look like. Mr. Taylor has engaged influential and genuinely reform-minded Muslims… to articulate and defend a progressive and tolerant version of Islam… The administration could stand to learn from him.” 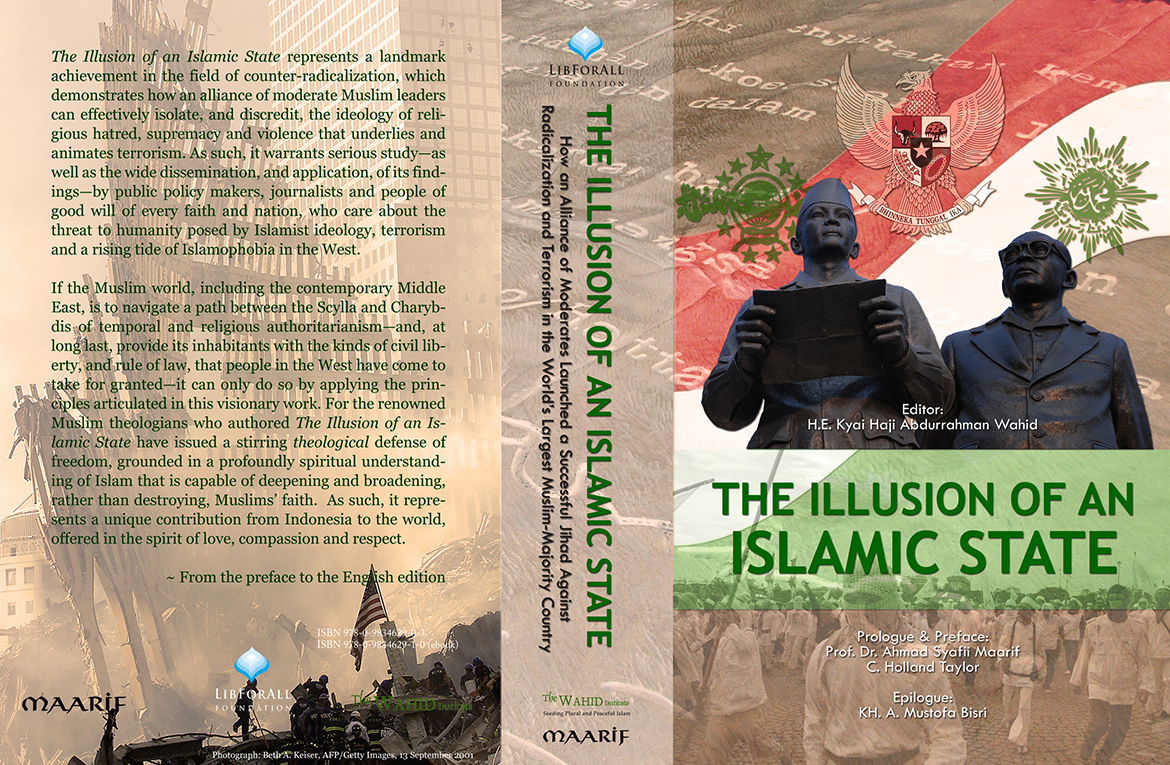 “The LibForAll Foundation is one of the rare success stories of an initiative in which moderate and liberal Muslims—too often the silent and disorganized majority—have organized effectively to counter radical Islamist groups by promoting democracy and tolerance.”

~ Democracy Digest, published by the National Endowment for Democracy 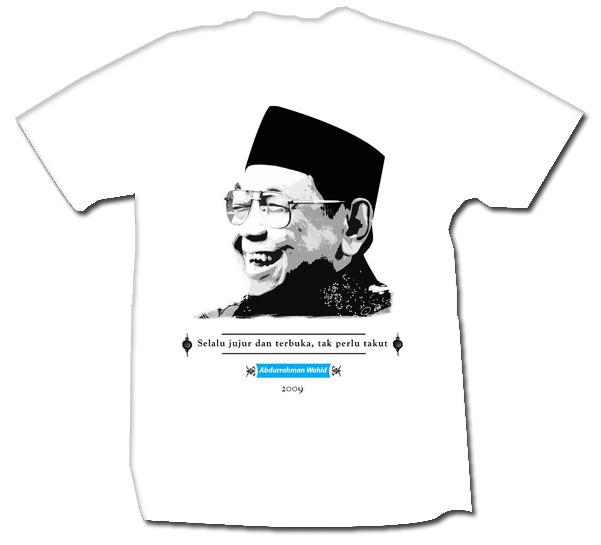 “Always be honest and open; there’s no need to be afraid.”

As K.H. Mustofa Bisri wrote in his poem Allahu Akbar: “If all of the 6 billion human inhabitants of this earth, which is no greater than a speck of dust, were blasphemous… or pious… it would not have the slightest effect upon His greatness.”

Omnipotent, and existing as absolute and eternal Truth, nothing could possibly threaten God. And as ar-Rahman (the Merciful) and ar-Rahim (the Compassionate), God has no enemies. Those who claim to defend God, Islam or the Prophet are thus either deluding themselves, or manipulating religion for their own mundane and political purposes, as we witnessed in the carefully manufactured outrage that swept the Muslim world several years ago, claiming hundreds of lives, in response to cartoons published in Denmark….

As Muslims, rather than harshly condemn others’ speech or beliefs, and employing threats or violence to constrain these, we should ask: why is there so little freedom of expression, and religion, in the so-called Muslim world? Exactly whose interests are served by laws such as Section 295-C of the Pakistani legal code, “Defiling the Name of Muhammad,” which mandates the death penalty for “blasphemy”[?]…

Rather than serve to protect God, Islam or Muhammad, such deliberately vague and repressive laws merely empower those with a worldly (i.e., political) agenda, and act as a “sword of Damocles” threatening not only religious minorities, but the right of mainstream Muslims to speak freely about their own religion without being threatened by the wrath of fundamentalists – exercised through the power of government or mobs – whose claims of “defending religion” are little more than a pretext for self-aggrandizement.

No objective observer can deny that Pakistani society – like so many others in the Muslim world – has undergone a process of coarsening under the influence of such laws, in tandem with the rise of religious extremism and the loss of true spirituality, without which the profound meaning and purpose of Islam remain veiled from human understanding.

The renowned Qur’anic injunction, “Let there be no compulsion in religion” (2:256), anticipated Article 18 of the Universal Declaration of Human Rights by over 13 centuries, and should serve as a inspiration to Muslim societies today, guiding them on the path to religious freedom and tolerance. Read the full essay (PDF).

Muslims and non-Muslims must unite to defeat the Wahhabi ideology.

In recent decades, Wahhabi/Salafi ideology has made substantial inroads throughout the Muslim world. Islamic fundamentalism has become a well-financed, multifaceted global movement that operates like a juggernaut in much of the developing world, and even among immigrant Muslim communities in the West. To neutralize the virulent ideology that underlies fundamentalist terrorism and threatens the very foundations of modern civilization, we must identify its advocates, understand their goals and strategies, evaluate their strengths and weaknesses, and effectively counter their every move. What we are talking about is nothing less than a global struggle for the soul of Islam.

The Sunni (as opposed to Shiite) fundamentalists’ goals generally include: claiming to restore the perfection of the early Islam practiced by Muhammad and his companions, who are known in Arabic as al-Salaf al-Salih, “the Righteous Ancestors”; establishing a utopian society based on these Salafi principles, by imposing their interpretation of Islamic law on all members of society; annihilating local variants of Islam in the name of authenticity and purity; transforming Islam from a personal faith into an authoritarian political system; establishing a pan-Islamic caliphate governed according to the strict tenets of Salafi Islam, and often conceived as stretching from Morocco to Indonesia and the Philippines; and, ultimately, bringing the entire world under the sway of their extremist ideology.

Fundamentalist strategy is often simple as well as brilliant. Extremists are quick to drape themselves in the mantle of Islam and declare their opponents kafir, or infidels, and thus smooth the way for slaughtering nonfundamentalist Muslims. Their theology rests upon a simplistic, literal and highly selective reading of the Quran and Sunnah (prophetic traditions), through which they seek to entrap the world-wide Muslim community in the confines of their narrow ideological grasp. Expansionist by nature, most fundamentalist groups constantly probe for weakness and an opportunity to strike, at any time or place, to further their authoritarian goals.

The armed ghazis (Islamic warriors) raiding from New York to Jakarta, Istanbul, Baghdad, London and Madrid are only the tip of the iceberg, forerunners of a vast and growing population that shares their radical views and ultimate objectives. The formidable strengths of this worldwide fundamentalist movement include…

We must employ effective strategies to counter each of these fundamentalist strengths. This can be accomplished only by bringing the combined weight of the vast majority of peace-loving Muslims, and the non-Muslim world, to bear in a coordinated global campaign whose goal is to resolve the crisis of misunderstanding that threatens to engulf our entire world.

An effective counterstrategy must be based upon a realistic assessment of our own strengths and weaknesses in the face of religious extremism and terror. Disunity, of course, has proved fatal to countless human societies faced with a similar existential threat. A lack of seriousness in confronting the imminent danger is likewise often fatal. Those who seek to promote a peaceful and tolerant understanding of Islam must overcome the paralyzing effects of inertia, and harness a number of actual or potential strengths, which can play a key role in neutralizing fundamentalist ideology. These strengths not only are assets in the struggle with religious extremism, but in their mirror form they point to the weakness at the heart of fundamentalist ideology. They are…

Though potentially decisive, most of these advantages remain latent or diffuse, and require mobilization to be effective in confronting fundamentalist ideology. In addition, no effort to defeat religious extremism can succeed without ultimately cutting off the flow of petrodollars used to finance that extremism, from Leeds to Jakarta.

Only by recognizing the problem, putting an end to the bickering within and between nationstates, and adopting a coherent long-term plan (executed with international leadership and commitment) can we begin to apply the brakes to the rampant spread of extremist ideas and hope to resolve the world’s crisis of misunderstanding before the global economy and modern civilization itself begin to crumble in the face of truly devastating attacks.

Muslims themselves can and must propagate an understanding of the “right” Islam, and thereby discredit extremist ideology. Yet to accomplish this task requires the understanding and support of like-minded individuals, organizations and governments throughout the world. Our goal must be to illuminate the hearts and minds of humanity, and offer a compelling alternate vision of Islam, one that banishes the fanatical ideology of hatred to the darkness from which it emerged. Read the full article (PDF).

“Islam Nusantara… does not arrive seeking to conquer anyone. [It] does not come to destroy, like those (extremists) do”
~ KH. Yahya Cholil Staquf, Secretary General, Nahdulatul Ulama