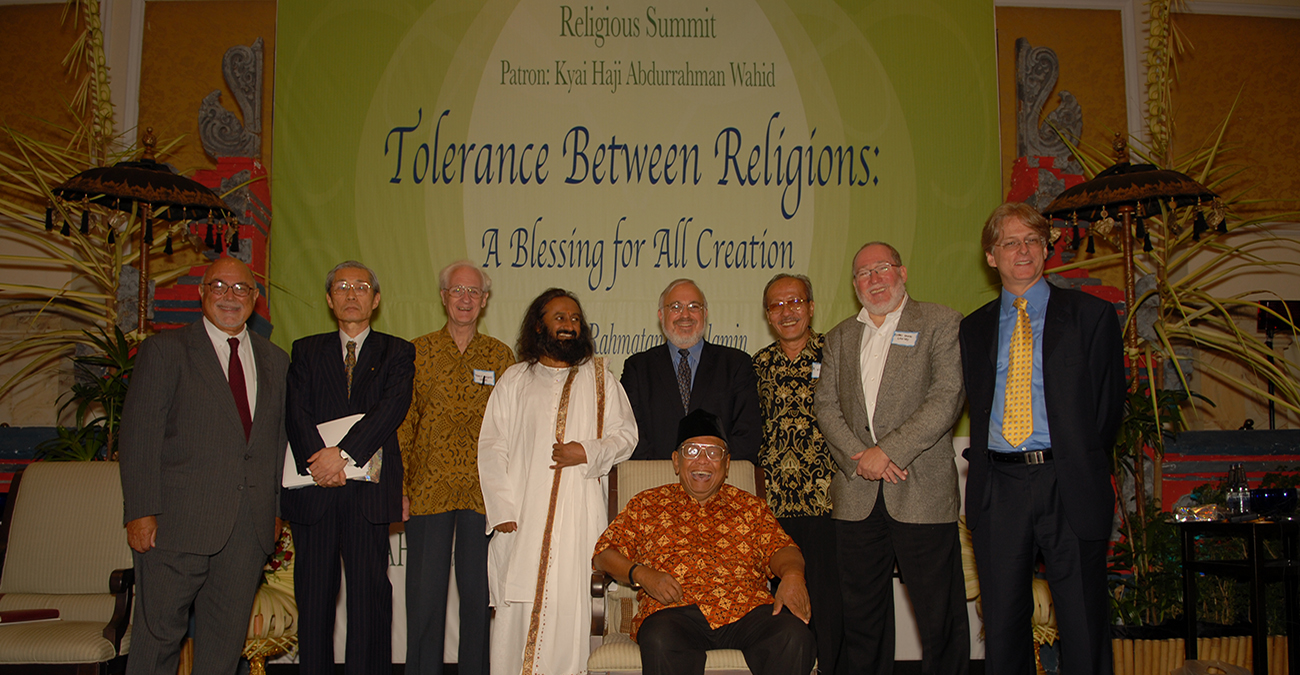 Bali, Indonesia — On June 12, 2007, LibForAll Foundation—together with the Wahid Institute and the Simon Wiesenthal Center’s Museum of Tolerance—hosted an historic religious summit in Indonesia, which has not only the world’s largest Muslim population, but also a venerable tradition of religious pluralism and tolerance that is under constant attack by religious extremists.

The summit occurred on the Indonesian island of Bali, whose people and economy have been devastated by repeated terrorist bombings. The day opened with LibForAll co-founder and senior advisor Kyai Haji Abdurrahman Wahid issuing a firm condemnation of Holocaust denial on the pages of the Wall Street Journal.  Co-authored by former Chief Rabbi of Israel and child Holocaust survivor Israel Meir Lau, the article called upon the world’s religious leaders to “not only refute the claims of terrorists and their ideological enablers, but also defend the rights of others to worship differently,” and “face up frankly to the evils of Holocaust denial.”

Massive media coverage of the event—by AP, Reuters, AFP and over 2,000 print and broadcast outlets—ensured that news of President Wahid’s and other participants’ courageous stand was widely disseminated throughout the world. In the words of the German newspaper Die Welt, “Indonesia is making an effort to uphold its tolerant and secular image. The world’s most populous Muslim nation has, for an entire day, become a showplace for a hitherto unique religious conference: the gathering on the holiday island of Bali concerned itself entirely with religious tolerance and recognizing Nazi persecution of Jews as an historical reality. Indonesia thereby consciously seeks to distance itself from fundamentalist and radical spirits.”

As evidence of the summit’s lasting global impact, Arabian Business magazine’s year-end issue listed the June 12th conference as one of the “top stories” of 2007, while al-Jazeera and other Middle East media have begun to routinely follow LibForAll activities. In May of 2008, the Simon Wiesenthal Center awarded its Medal of Valor to President Wahid “for his leadership of the LibForAll Foundation and his efforts to combat Holocaust denial in the Muslim world.”  ~  Reuters/Los Angeles Times

The summit opened with the recitation of Muslim, Hindu, Christian, Buddhist and Jewish scriptures. Here, an Islamic boarding school student from Central Java reads from the 21st chapter of the Qur’an, whose verse—“I (Allah) created you (Muhammad) to be nothing but a blessing for all creation”—serves as one of LibForAll’s guiding principles, which unites those who are committed to a pluralistic and tolerant understanding of Islam, at peace with itself and the modern world.

Deriving its inspiration from this verse, the summit’s morning plenary was entitled: “Religious Faith: Source of Conflict, or a Blessing for All Creation?” 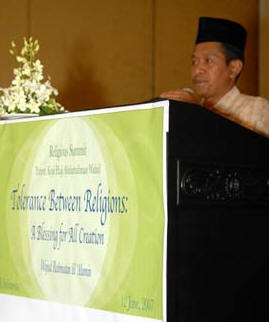 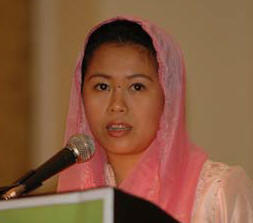 President Wahid’s daughter Yenny—an accomplished spiritual and political leader in her own right—said, “We have witnessed many horrible things done in the name of ‘defending God.’ My father has long proclaimed that ‘God needs no defense.’ This is especially true if the act of ‘defending God’ is done by harming God’s creation. We human beings are the ones who need to be saved, from our own small-mindedness and petty pride. The aim of this conference is to bring together spiritual people from different religions and denominations, to prove to the world that tolerance within and between religions does in fact exist.”

In the opening session, three religious leaders engaged in a roundtable discussion of the plenary topic: President Wahid (center), a renowned Islamic theologian who for 15 years headed the world’s largest Muslim organization, the Nahdlatul Ulama; His Holiness Sri Sri Ravi Shankar (left), a revered Hindu leader with a global following; and Rabbi Daniel Landes (right) — Director of the Pardes Institute of Jewish Studies in Jerusalem, and scion of a long line of rabbis including the former Chief Rabbi of Jerusalem. 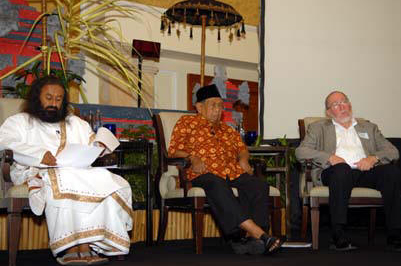 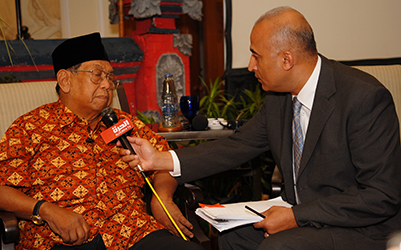 “Although I am a good friend of Mahmoud Ahmadinejad, I have to say he is wrong,” President Wahid told the conference, referring to the Iranian president’s dismissal of the Holocaust as a myth. “He falsified history.”

President Wahid (left, being interviewed in Arabic for broadcast in the Middle East) and other Muslim speakers at the summit had previously declined invitations to attend the December 2006 Holocaust Denial conference held in Tehran, Iran. 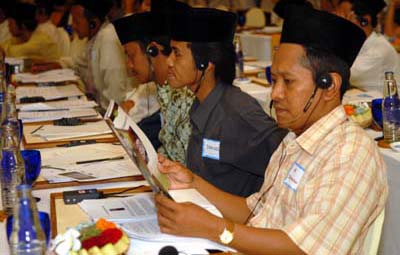 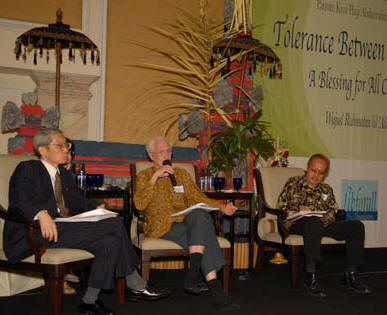 Each of the speakers provided compelling personal testimony, and called upon their fellow religious leaders to take a principled stand against the ideologies of hatred and violence, whatever their source. 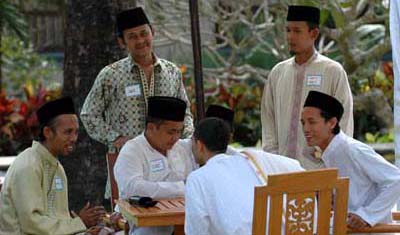 Rest breaks were scheduled to coincide with the normal times for Muslim prayer. Young Muslim leaders from Central Java washing in preparation for noon prayer (right) and engaged in animated discussion with an Indian monk who serves as assistant to Hindu religious leader Sri Sri Ravi Shankar (above). 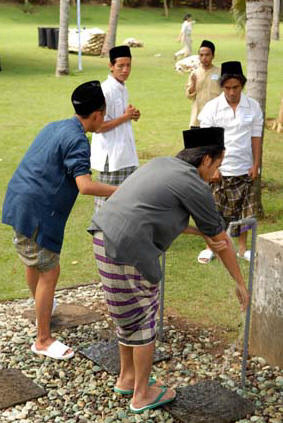 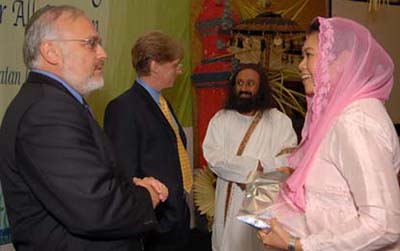 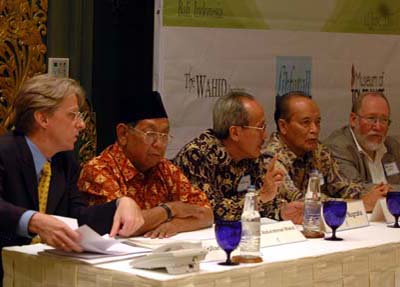 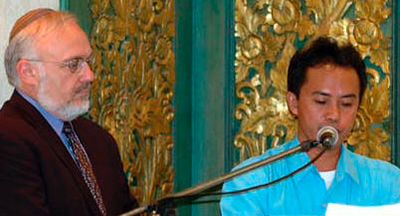 An afternoon “Victims of Terrorism” panel included two Hindu victims of the first Bali bombing in October of 2002, and Febby (right), a Muslim who suffered burns to over 90% of his body in the Jakarta Marriott bombing in 2004, which occurred just ten days before his scheduled wedding. Febby and his fiancé were married some two months later, in a Jakarta Hospital’s Burn Unit. 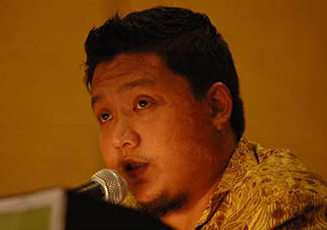 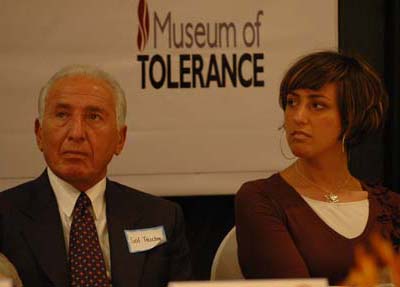 Holocaust survivor Sol Teichman (left, with suicide bombing victim Tzippy Cohen) described how he lost 70 members of his family to the Holocaust.

“I ask only one question,” said Teichman, who was sent to Auschwitz, Dachau, and three other concentration camps before allied forces liberated him in 1945.

“If [the Holocaust] is a lie, can you tell me what happened to my mother? To my sister? To my brothers? To my grandparents?”

Those of all faiths—Muslims, Hindus, Christians, Jews and Buddhists—were moved to tears, as victims of terror described their personal suffering and loss of family members at the hands of fanatics, driven by the ideology of hatred. 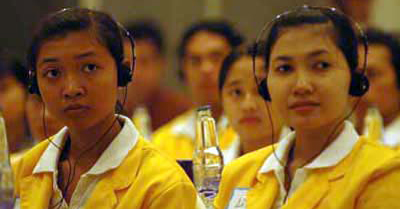 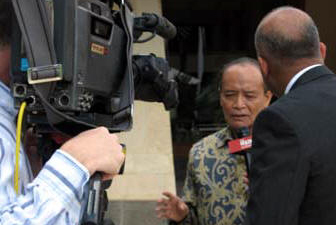 Dr. Syafii Maarif, former chairman of the Muhammadiyah—the world’s second-largest Muslim organization, with 30 million members—helped moderate an afternoon session on Best Practices of Tolerance, which rocked the audience with impassioned calls for a pluralistic and tolerant understanding of Islam.

Speakers included Dr. Abdul Munir Mulkhan of the Muhammadiyah, who is a member of Indonesia’s Human Rights Commission; Kyai Haji Yusuf Chudlori, a leading cleric from the 50-million-strong Nahdlatul Ulama; and Haji Bambang (right), a Muslim who lives near the site of the first Bali bombing, and who helped lead the evacuation of victims from the blazing inferno on the night of that attack. 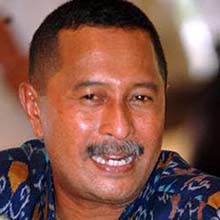 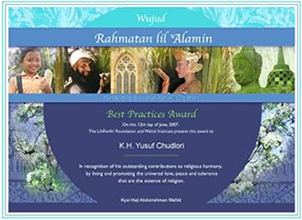 Each of the “Best Practices of Tolerance” speakers received LibForAll’s Wujud Rahmatan lil ‘Alamin (“Manifesting Religion as a Blessing for All Creation”) Award, in recognition of their upholding the highest principles of religion, and inspiring others to follow their example. 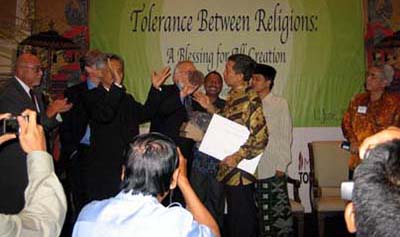 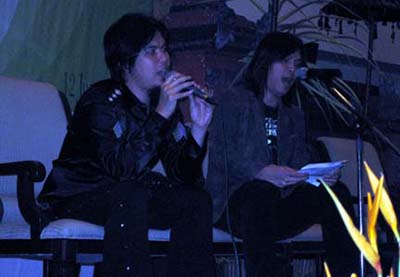 LibForAll activists Ahmad Dhani and Once of the legendary rock group Dewa closed the event with a performance of their #1 hits Satu (“Oneness”) and Laskar Cinta (“Warriors of Love”), the latter publicly performed in English for the first time.

Embodying the vision of religion as “a blessing for all creation,” the songs call upon youth to respect religious differences, and devote themselves to the path of spiritual love, rather than hatred and violence.

Religion, the art of peace, speaks to the peoples of the world of compassion, justice and mutual understanding. A blessing for all creation, religion is a constant reminder to humanity of the divine spark in every person. Yet today the world shudders as horrific acts are perpetrated in the name of religion. All too often, hatred and violence replace peace as religion is manipulated for political purposes.

Leaders of the world’s religions have a special obligation to refute such claims, and to mobilize their communities to not only respect, but also defend the rights of others to live and worship differently. We, the undersigned, gathered here today in Bali, Indonesia, take a stand against wanton violence, and urge other religious leaders to follow our example in respect to our diversity and our commitment to end the violence.