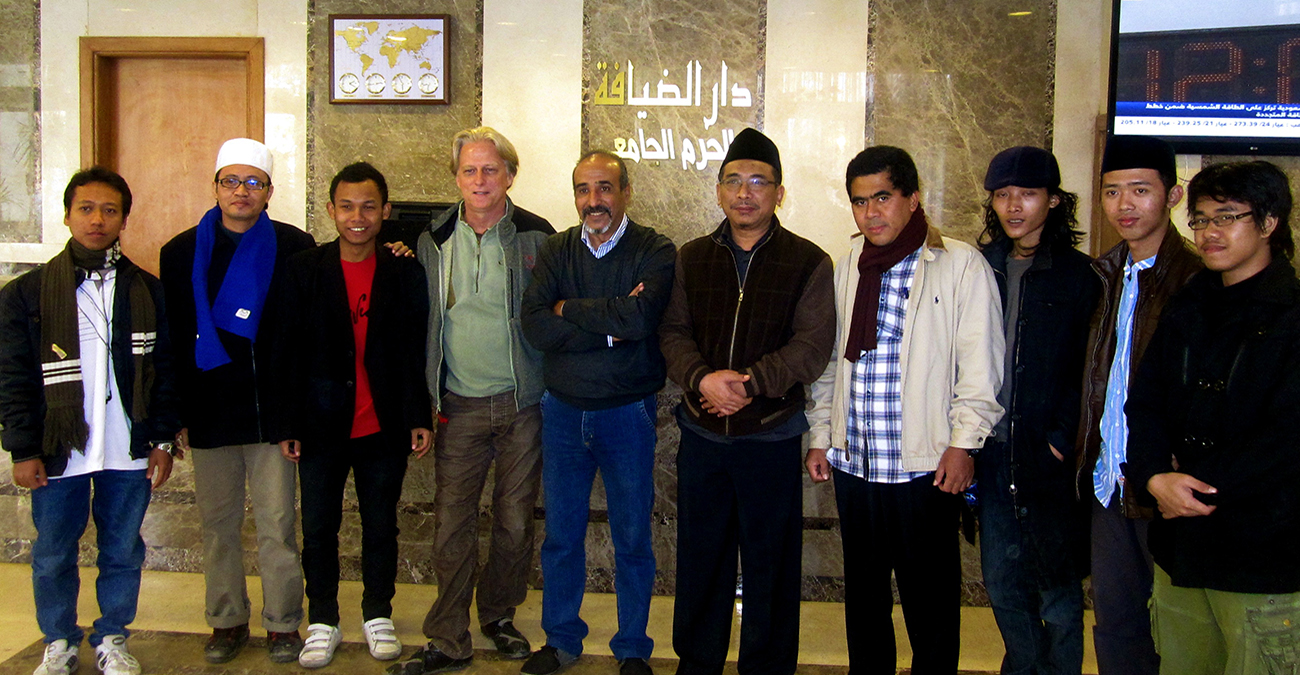 In December of 2013, the IIQS Center for Contemporary Islam organized a workshop to investigate the meaning of certain “grand categories” within the field of Islamic thought—specifically, shari’a and fiqh. Over the course of two days, academic and theological experts from the Middle East and Southeast Asia closely examined the meaning ascribed to these terms within the Qur’an itself, and other meanings created and ascribed to these terms within the historical development—and highly politicized context—of Islam following the death of the Prophet Muhammad (saw.). 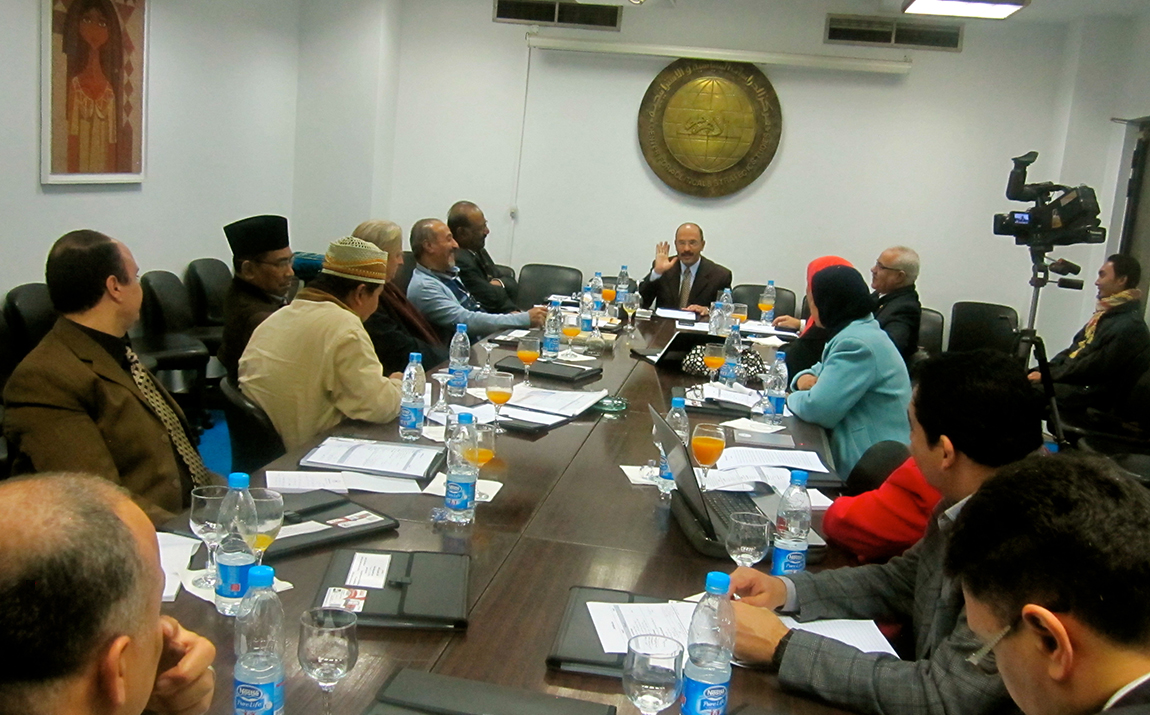 Al-Ahram Center for Political and Strategic Studies (CPSS) hosted the first day of the workshop. In the above photograph Dr. Abdel-Radi Abdel-Mohsen—Director of the Islamic Research & Studies Center at Cairo University’s Faculty of Dar al-Ulum—delivers his opening presentation. Seated to his right is Dr. Nabil Abdel-Fatah, former director of the Religious Studies Unit at CPSS. CPSS and its staff were prime targets of the Muslim Brotherhood regime under Mohamed Morsi, which viewed the Center as a major obstacle to the Brotherhood’s establishment of theocratic rule in Egypt. 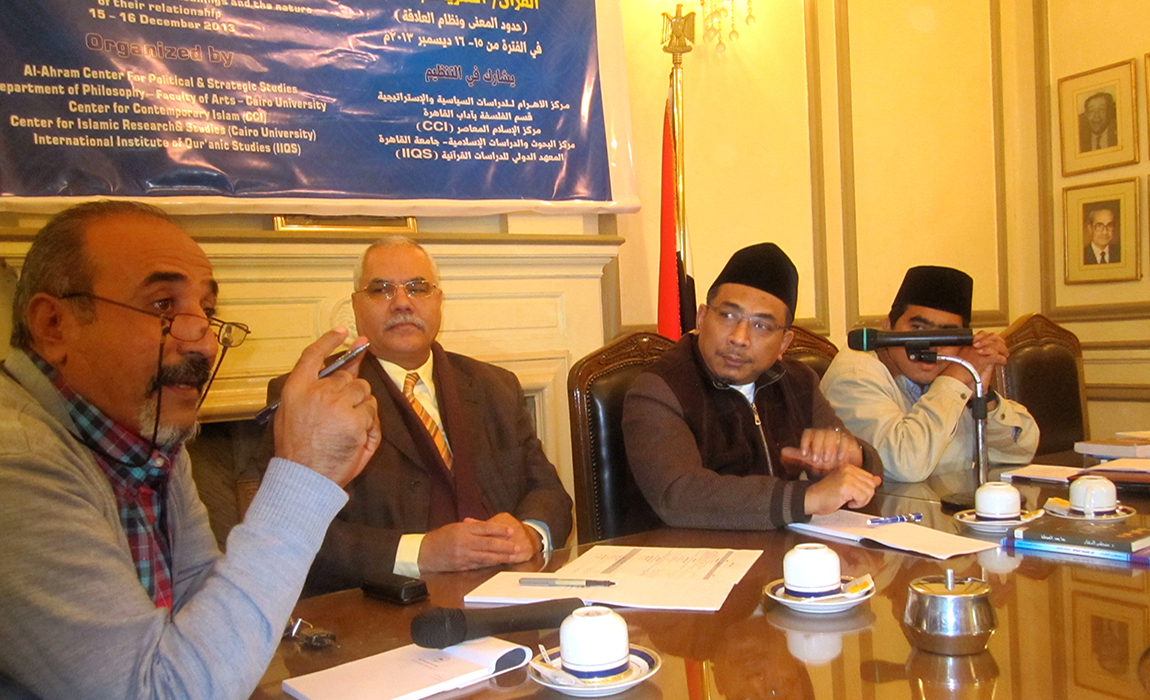 Cairo University hosted the second day of the workshop, within the historic grand meeting room of its Faculty of Arts, which honors the renowned Egyptian author, intellectual and educational reformer Taha Hussein. Here discussion focused specifically on the Egyptian and Indonesian experience with shari’a and fiqh, including the mechanisms through which Indonesian ulama have historically accommodated local conditions while maintaining the integrity of the Islamic tradition, by emphasizing the flexible and adaptive elements of classical Islamic law, and the universal principles of shari‘a. Proceedings of the two-day workshop will be published in the journal of Cairo University’s Department of Philosophy, under the joint aegis of Cairo University, IIQS and CCI. 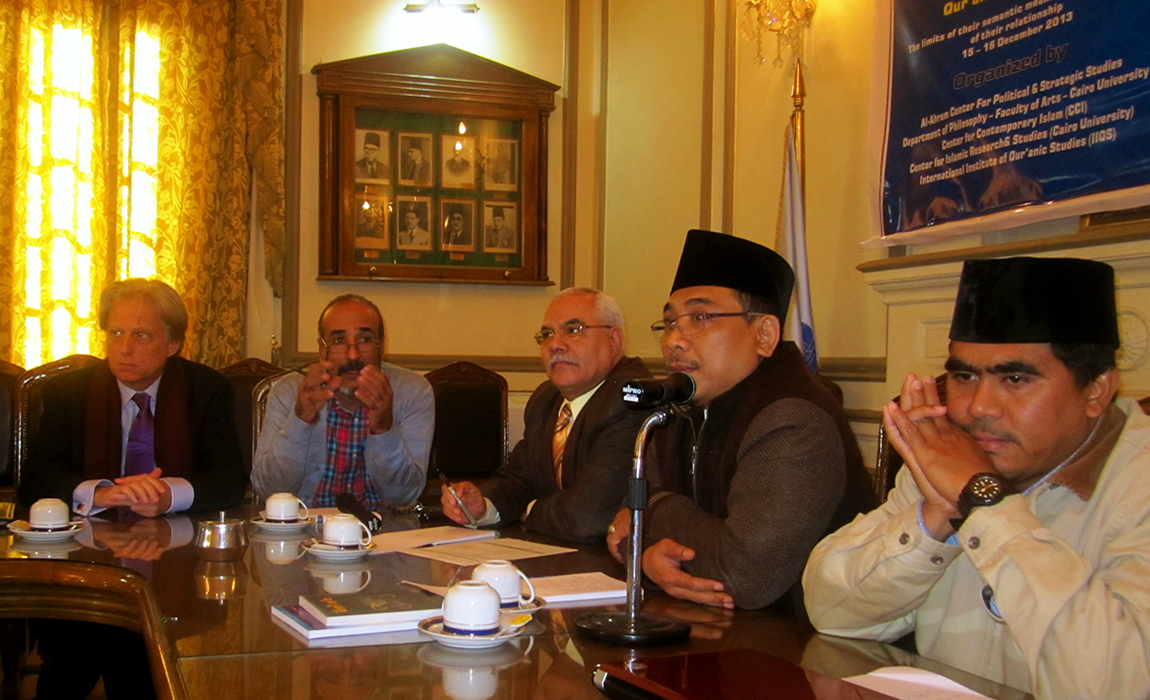 On December 17 & 18, Dr. Mabrook, Shaykh Yahya, Shaykh Ghofur and Mr. Taylor engaged in prolonged discussion—and refinement—of the intellectual/theological arguments contained in an Arabic-language book currently being written by CCI, whose working title is Between the Qur’an and History: How Politics Manipulates the Concept of Shari‘a Within Muslim Communities.

Following on the heels of the workshop, this highly focused discussion led to a remarkable cross-fertilization of ideas, and also revealed the enormous gap that has opened in Arab society between modernists, Muslim extremists and classically-trained Sunni ulama, with each disputing and rejecting the others’ authority.

This project seeks, among other objectives, to bridge the gap between academics and traditional Sunni ulama—i.e., to reconcile reason and faith in holy scriptures—in order to “help stimulate a renaissance of Islamic pluralism, tolerance and critical thinking—[which will enable] Muslims to embrace the universal and cosmopolitan principles that characterized Islamic civilization at its height, while adapting peacefully to the modern world.” ~ LibForAll/IIQS co-founder KH. Abdurrahman Wahid

Approximately 4,000 Indonesian students are enrolled at al Azhar University in Cairo, many of them members of the Nahdlatul Ulama trained in NU pesantren (madrasahs). During their visit to Cairo, KH. Abdul Ghofur Maemun (former head of the NU students’ association at al-Azhar) and KH. Yahya Cholil Staquf met with over 100 members of this association, and set in motion a process whereby NU students will identify and establish relationships with traditional Sunni ulama in Egypt who share the NU’s concern about the spread of religious extremism and the need to adapt peacefully to conditions in the modern world, preparatory to senior NU clerics meeting said ulama on future visits to Egypt. As Shaykh Yahya observed, Egypt and the Arab world need a grassroots movement of traditional Muslims prepared to resist the inroads of religious extremism, as the NU has done in Southeast Asia since its establishment in 1926 by KH. Hasyim Asy’ari—the paternal grandfather of LibForAll/IIQS co-founder HE. Kyai Haji Abdurrahman Wahid—and countless other traditional ulama.