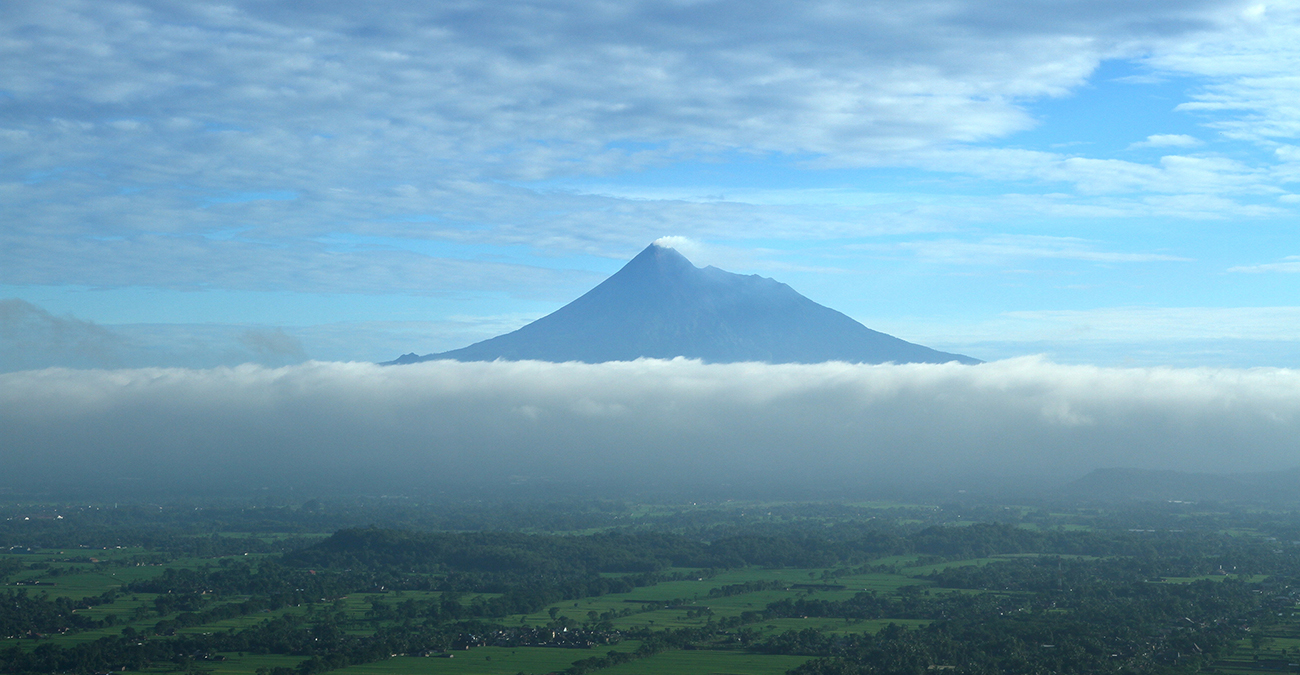 “Dry grass burns fast and hot,” warns an old Javanese proverb, whose truth is on display whenever and wherever a harsh, narrow and rigid (i.e., spiritually arid) interpretation of religion gives birth to hatred, supremacism and violence.

“…for Islam burst forth as a military and political overlord,
and it was precisely in the name of Islam
that [Arab tribes] justified their rule. 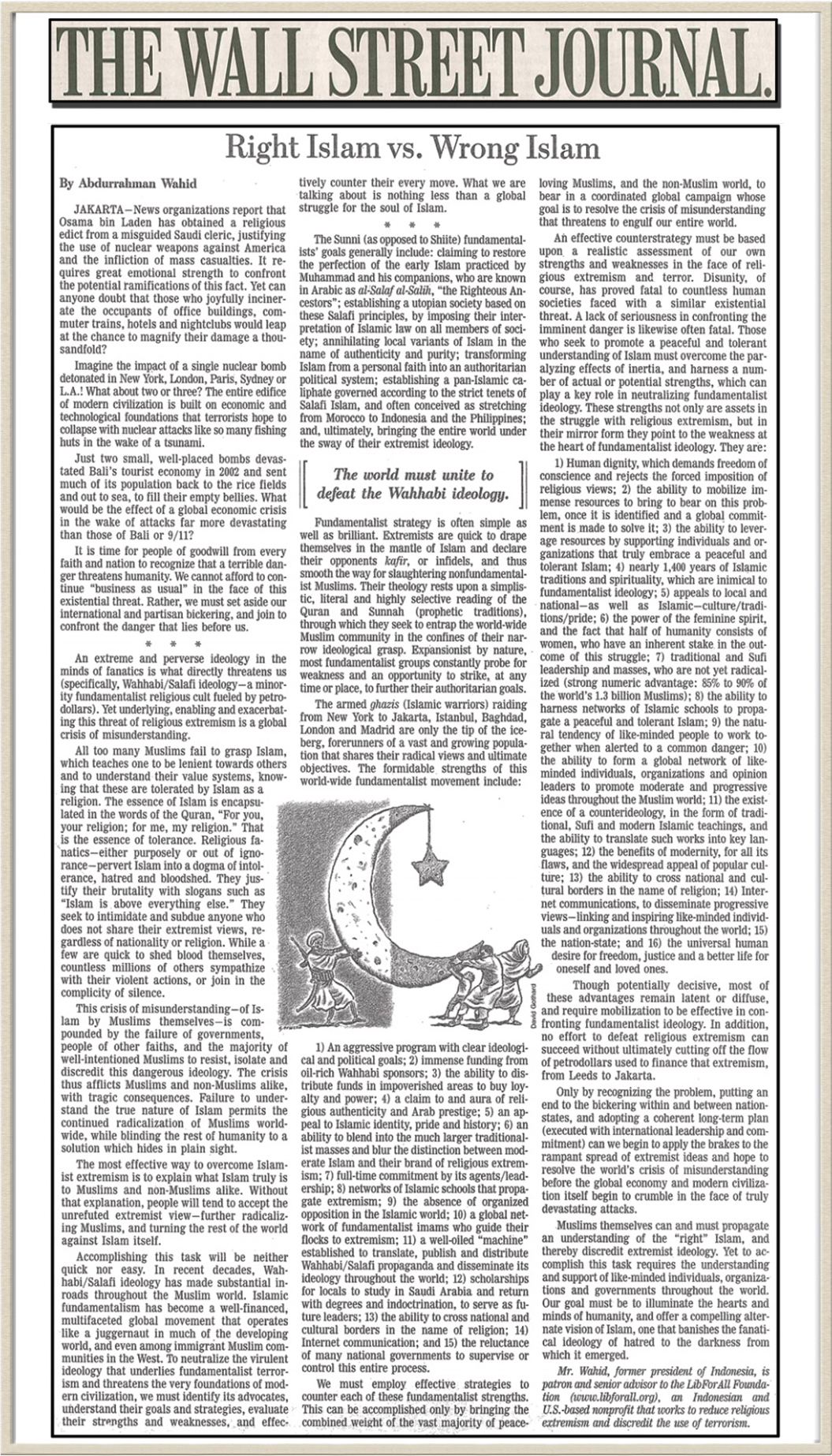 “Muslims and non-Muslims must unite to defeat the Wahhabi ideology.” This “must-read” op-ed by LibForAll’s co-founder, board member and senior advisor appeared in the year-end editions of the U.S. and European Wall Street Journal (Friday, December 30, 2005) labeled “EXTRA! Read all about it!”, and in the first edition of 2006 in the Asian Wall Street Journal.

Subsequently described by the Wall Street Journal as “a seminal article for this newspaper” (February 25, 2006), and praised by the Hudson Institute’s Center on Islam, Democracy and the Muslim World as “a far-ranging and detailed account of what [Wahid] views as ‘the global struggle for the soul of Islam’… We recommend this article, which we’ve re-published in this issue of Current Trends in Islamist Ideology, to very serious reading and reflection.”

President Wahid’s article remains as relevant today as when it was published more than a decade ago—and is thus a profoundly damning critique of Western governments’ persistent denial of reality, and their failure to address the threat of Islamist ideology.

by A. Mustofa Bisri and C. Holland Taylor

The stakes are high, and the challenge enormous. For what we are facing today is even more dangerous than physical acts of terrorism: that is, the onslaught of extremist ideology, which is provoking a visceral backlash in the West, in an ever-escalating cycle of hatred and violence. Decades of petrodollar-financed Wahhabi/Salafi proselytization have coarsened Muslims’ understanding of their faith and stoked the extreme intolerance that again and again erupts in horrific bloodshed and destruction that dominate the world’s headlines…

As a result of extremist actions, animosity towards Islam and Muslims is rapidly escalating in the West. This includes well-organized efforts to legally declare that Islam is not a religion, but a subversive political ideology whose adherents are not entitled to the constitutional protections and freedom afforded to other faiths. On the other side of the political spectrum are those who minimize the threat of Islamist extremism, seek to limit freedom of expression and ostracize or punish anyone who dares to discuss the very real problems that exist within Muslim communities in the West and throughout the Islamic world.

Thus, an essential step—if the US and other western nations are to establish a rational, sound and mutually beneficial policy towards Islam and Muslims—is to depoliticize the issue of islam within their respective societies and create a bipartisan/international consensus. Its goal, as Wahid wrote in an opinion piece in the Wall Street Journal in 2005, is to ‘illuminate the hearts and minds of humanity and offer a compelling alternate vision of Islam that banishes the fanatical ideology of hatred to the darkness from which it emerged.’ 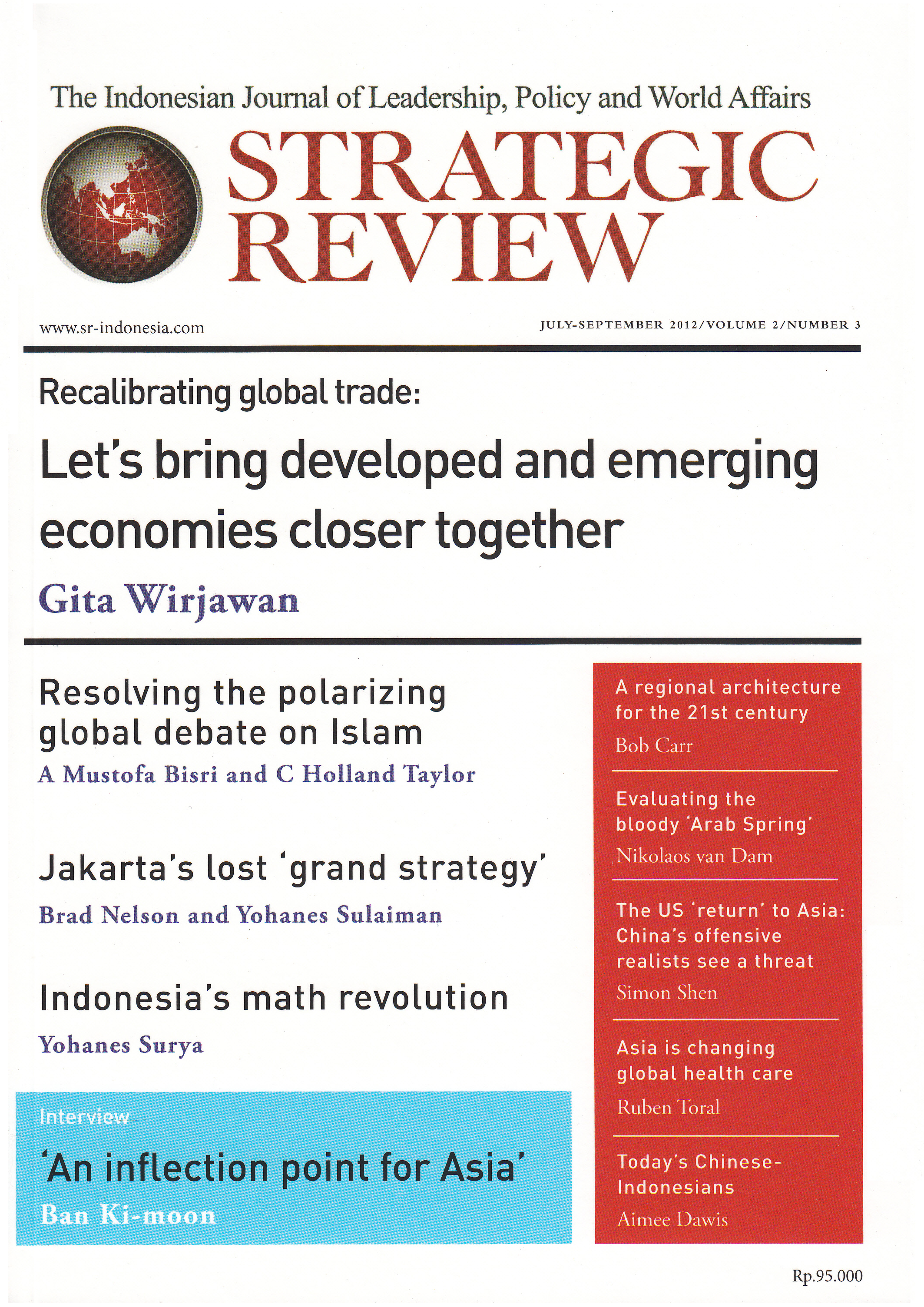 The country is emerging as a champion of tolerance amid the rise of the Islamic State.

Leading the charge in the nation that has the largest Muslim population in the world but which has typically punched below its weight in Islamic discourse is Kyai Haji Yahya Cholil Staquf, general secretary of Nahdlatul Ulama (NU), the largest Muslim organization in the country and arguably the world, with at least 50 million adherents…

Yahya is the leading proponent of what Nahdlatul Ulama calls Islam Nusantara, the Islam of the archipelago. He and his allies argue that Islam in Indonesia is different from that in most other parts of the world because it did not arrive at the end of a sword, but peacefully…

The gulf between the Salafis, Wahhabi, and more tolerant beliefs is the result of different interpretations of what Islam is. According to Yahya, insistence on what is written and the rejection of anything that is not written in the Quran and the Hadiths is wrong. And, taking a position that appalls those who insist on the primacy of these texts, he argues that they in fact contain the germ of the current problems facing Islam, which are spilling out in violence. Read the full article (PDF).

“The Nahdlatul Ulama calls upon people of goodwill of every faith and nation to join in building a global consensus not to politicize Islam, and to marginalize those who would exploit Islam in such a way as to harm others.”

“[A] 90-minute film that amounts to a relentless, religious repudiation of the Islamic State and the opening salvo in a global campaign by the world’s largest Muslim group to challenge its ideology head-on.”

“Remarkable... a roaring success... If it can work in Indonesia, why not in the rest of the world?”

“Cultures and religions that appear to be widely divergent are in fact like colors emerging from a prism, derived from a single source of light.”

How Islam learned to adapt in Nusantara 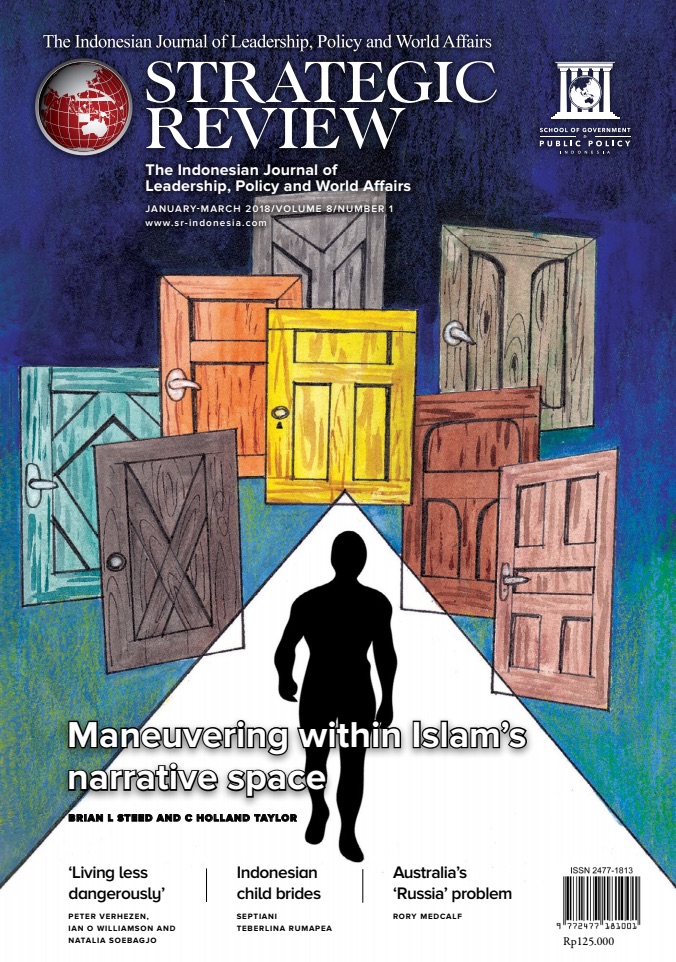 The following essay in this edition’s cover package, “Lessons from Islam Nusantara,” describes how inhabitants of the Malay archipelago have successfully maneuvered in the narrative space for more than 500 years, to produce one of the most pluralistic and tolerant Islamic societies in the world today. Click to continue reading a PDF of this article.

A rising tide of Islamism in its myriad forms – they run the gamut from preman berjubah (thugs draped in Arab garb) to social media activists, proselytism movements educational networks, political parties and even terrorist groups affiliated with Al Qaeda and the Islamic State – has been among the most noteworthy phenomena to emerge in Indonesia during the past 20 years.

Individually and collectively, these developments threaten the unity of Indonesia and its people, often in ways more subtle and profound than the bloody conflicts waged in the name of Islam in regions as diverse as Ambon, Poso and Aceh. And yet, this threat is far from new. Both before and after Indonesia achieved independence, its founding fathers had to grapple with the tension that exists between Islamic orthodoxy and the ideals of the modern nation-state. In June 1945 the members of the Preparatory Committee for Indonesian Independence reached a temporary consensus with the Jakarta Charter, which subsequently formed the basis for the preamble to the Constitution of Indonesia. It originally included an obligation for Muslims to abide by Islamic law (Shariah).

In the course of further negotiation, secular Muslim nationalists, including Soekarno and Muhammad Hatta, persuaded their fellow committee members to delete seven words – “with Muslims required to observe Islamic law” – from the first principle of Pancasila, the state ideology. Hatta argued convincingly that Hindu- and Christian-dominated regions of the East Indies would refuse to join the Republic of Indonesia if its Constitution were to contain the seeds of an Islamic state. Click to continue reading a PDF of this article. 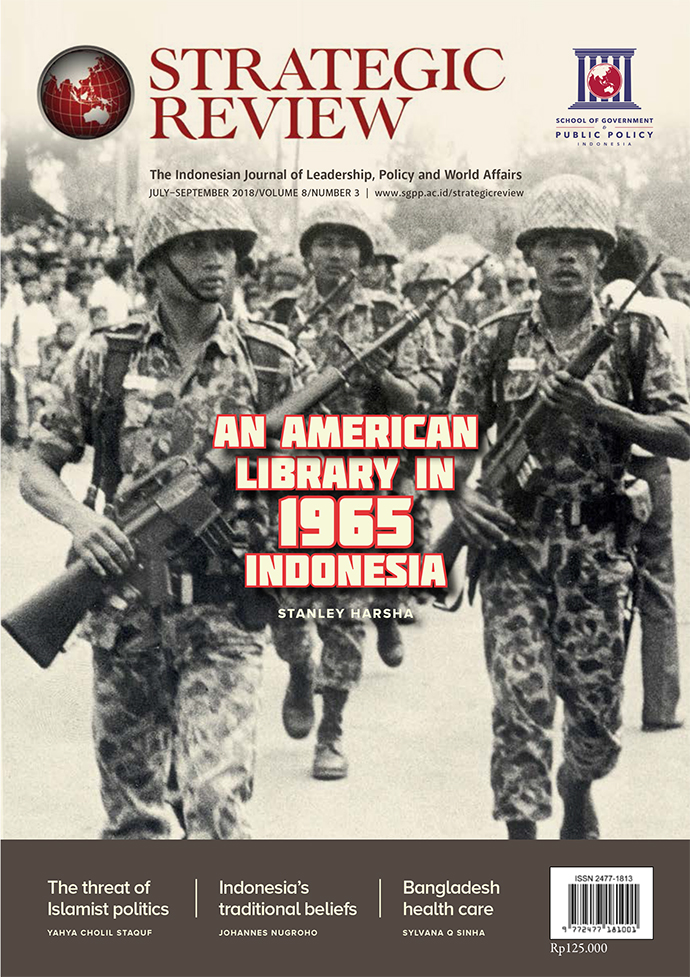 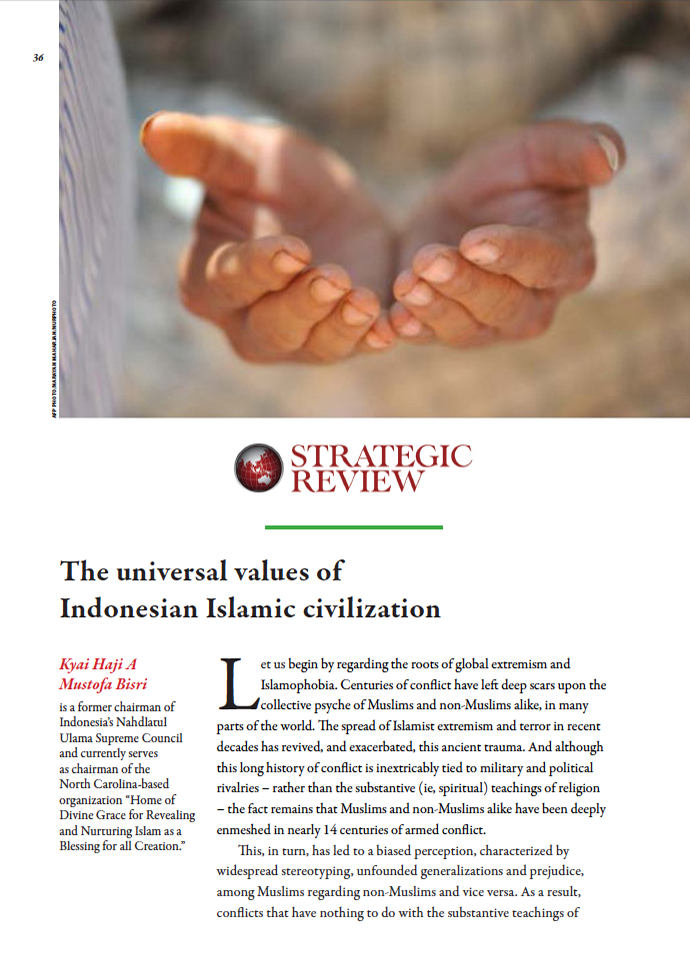 Centuries of conflict have left deep scars upon the collective psyche of Muslims and non-Muslims alike, in many parts of the world. The spread of Islamist extremism and terror in recent decades has revived, and exacerbated, this ancient trauma. And although this long history of conflict is inextricably tied to military and political rivalries – rather than the substantive (ie, spiritual) teachings of religion – the fact remains that Muslims and non-Muslims alike have been deeply enmeshed in nearly 14 centuries of armed conflict.

The spread of a shallow understanding of Islam renders this situation critical, as highly vocal elements within the Muslim population at large (ie, extremist groups) justify their harsh and often savage behavior by claiming to act in accord with God’s commands, although they are grievously mistaken.

According to the Sunni view of Islam, every aspect and expression of religion should be imbued with rahmah (love and compassion) and foster the perfection of human nature, as expressed through sublime moral character (akhlaqul karima). This may be achieved – in fact, may only be achieved – if one’s understanding and practice of the exoteric norms of religion such as ritual prayer, fasting and so forth are augmented by a full grasp of its inner, spiritual dimension.

When Muslim extremists act in ways that contradict the substantive teachings of religion, while loudly claiming to represent the true teachings of Islam, it is only natural that many non-Muslims will take these extremists at their word and develop (or, in light of history, “rediscover”) an aversion toward Islam itself.

Certain steps are essential to address the complex and deep-rooted problems of Islamist extremism and Islamophobia: Click to continue reading a PDF of this article.

Since 2014, LibForAll Foundation has worked closely with Dr. Rüdiger Lohlker, one of the world’s leading experts regarding the online/offline activities of al-Qaeda, ISIS and other terror groups.

A senior professor of Islamic Studies at the University of Vienna and respected counter-terrorism advisor to the European Union and various Western nations, Dr. Lohlker heads the Vienna Observatory for Applied Research on Terrorism and Extremism (VORTEX), whose founding partners include the University of Vienna, Nahdlatul Ulama, GP Ansor, LibForAll/IIQS and Bayt ar-Rahmah.

[I]t is crystal clear—to virtually anyone who has the linguistic capacity to grasp and the opportunity to witness what jihadists are actually saying, writing and doing, both online and offline—that religion matters…

[W]ithout deconstructing the theology of violence inherent in jihadi communications and practice, these religious ideas will continue to inspire others to act, long after any given organized force, such as the Islamic State, may be destroyed on the ground….

Flatly denying the importance of religion causes many in the West to overlook a crucial element of jihadi thought and action. This is particularly evident with regard to the mantra so often repeated in the wake of each new terrorist attack, viz.: “Islam is the religion of peace.”  The claim that religion motivates only positive behavior among human beings, and the implicit denial that religion may ever legitimize negative behavior, cannot withstand intellectual scrutiny. History provides countless examples of both positive and negative behavior legitimized by religion….

It is understandable that many Muslims react by declaring that IS-Islam is “un-Islamic” and alien to their religion. However, since IS and other jihadi propaganda does not target persons who are firmly anchored in an alternate understanding of their faith, and does actually tap into significant elements of Islamic heritage, the aforementioned “denial response” may be viewed as that of believers who do not recognize—or do not wish to recognize—the religion they profess when confronted with the brutal crimes committed by terrorists in the name of Islam, and thus refuse to acknowledge the terrorists’ thoughts and actions as religiously-based.

Whatever motivates this reaction on the part of mainstream Muslims—and their counterparts in the West—this denial response will not solve the problem we face, nor destroy the religious appeal of jihadi Islam….

As history clearly proves: violence is a contingent possibility in religion(s). Acknowledging this fact, and possibility, does not constitute an insult to—nor “defamation of”—religion. Rather, it is a necessary step if we are to understand, identify, marginalize and ultimately defeat those who advocate violence. By acknowledging the contingency of a violent turn, the possibility of religious adherents embracing non-violence is acknowledged as well….

One simple fact needs to be emphasized at this point, in order to avoid a misconception that often results from the innate human tendency to think in terms of antitheses. Acknowledging and even stressing the importance of religion to contemporary jihadism does not imply that religion is the sole reason for the existence of jihadism, or any other form of religiously-motivated terrorism. Jihadism is, in fact, a multi-determined, multi-factorial phenomenon. The misconception referenced above leads many otherwise rational people—including Western policy makers, analysts, scholars and journalists—to deny the importance of religion in contemporary jihadism.

To download and read the full text of this timely and thought-provoking article, please click on an image below either with or without key passages highlighted for quicker reading. 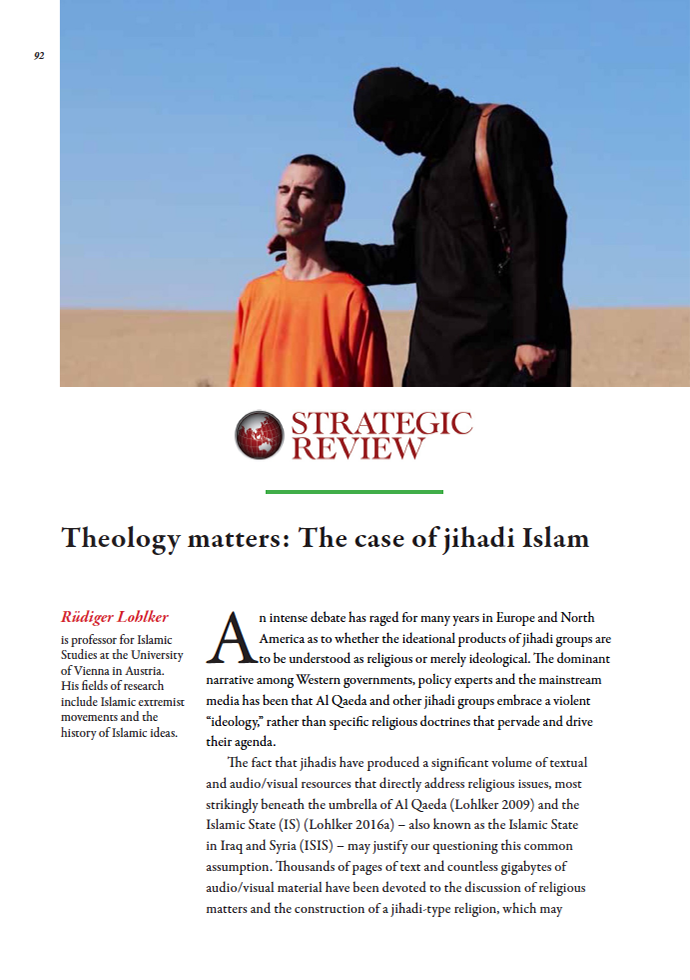 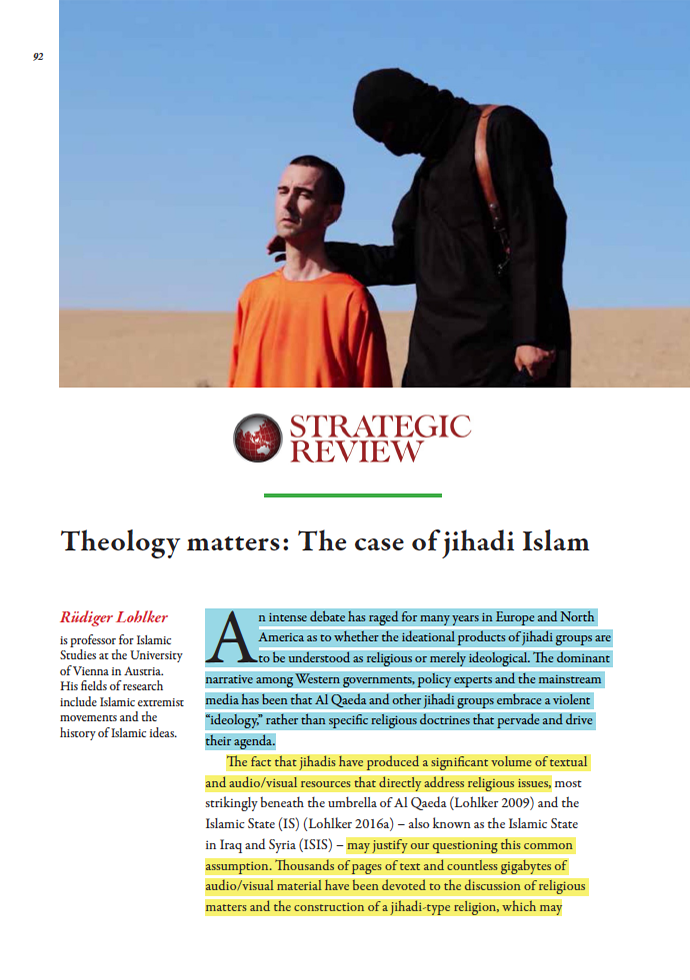