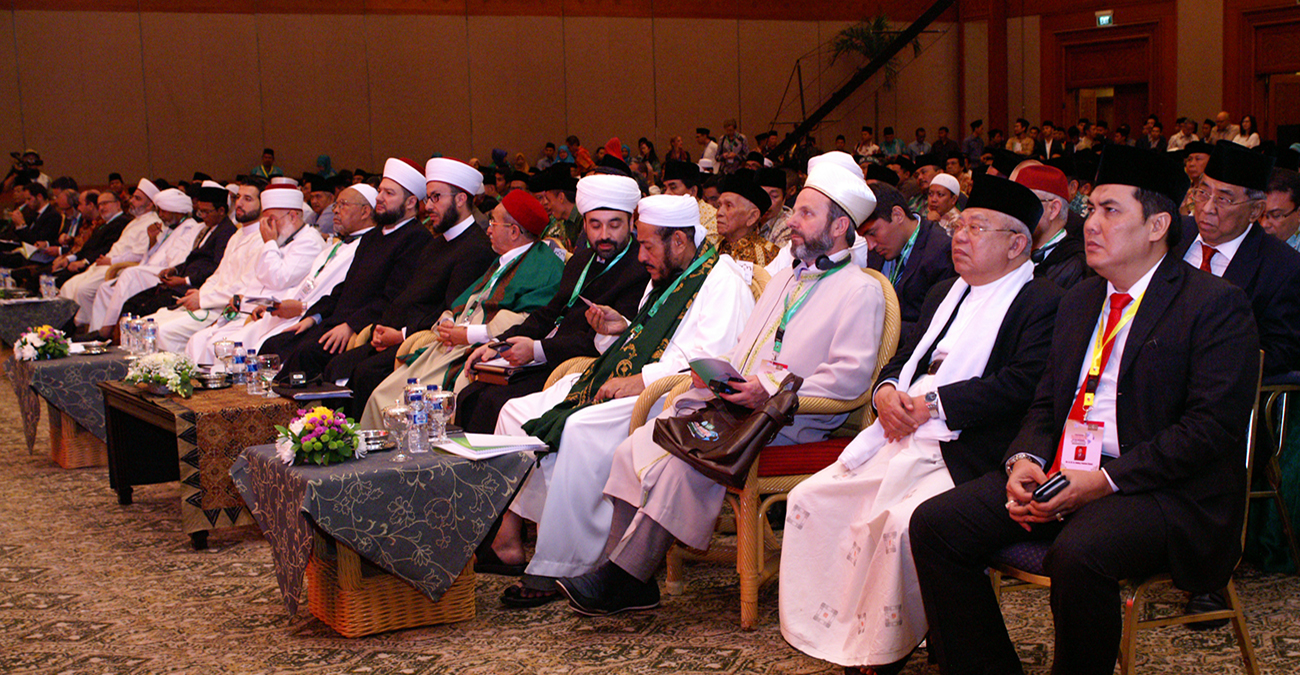 JAKARTA, INDONESIA: On May 9 and 10, 2016, approximately 400 traditional Muslim scholars from 30 nations gathered to attend an International Summit of Moderate Islamic Leaders sponsored by the world’s largest Muslim organization, the Nahdlatul Ulama (NU), and its affiliate Bayt ar-Rahmah. At the Summit’s conclusion, the NU Central Board promulgated a 16-point declaration that affirmed the mainstream nature of the NU’s understanding and practice of traditional Sunni Islam; identified the salient factors driving Islamist extremism and terror worldwide; and committed the NU to develop a global alliance capable of addressing the twin threats of Sunni and Shi’ite extremism.

The event featured expert presentations and detailed discussion of the relationship between Islam and nationalism; the unchecked spread of religious extremism, terror, armed conflict in the Middle East and a rising tide of Islamophobia in the West; the role of certain Middle East governments in fostering the spread of sectarian hatred; and the need for an honest appraisal of, and response to, Islamist extremism and terror.

Speakers included Indonesia’s Vice President; the Chairwoman of Indonesia’s largest political party; the Chairmen of the NU’s Executive Board and its Supreme Council; Indonesia’s Minister of Religion; its Coordinating Minister for Political, Legal and Security Affairs; the Director of Indonesia’s State Intelligence Agency; the Director of Research at the Center for Asymmetric Threat Studies, Swedish National Defense College; a scholar from the Vienna Observatory for Applied Research on Terrorism and Extremism (VORTEX); a scholar from the Hudson Institute/Johns Hopkins University; and numerous ulama from the Middle East, North Africa, South and Southeast Asia and Europe. 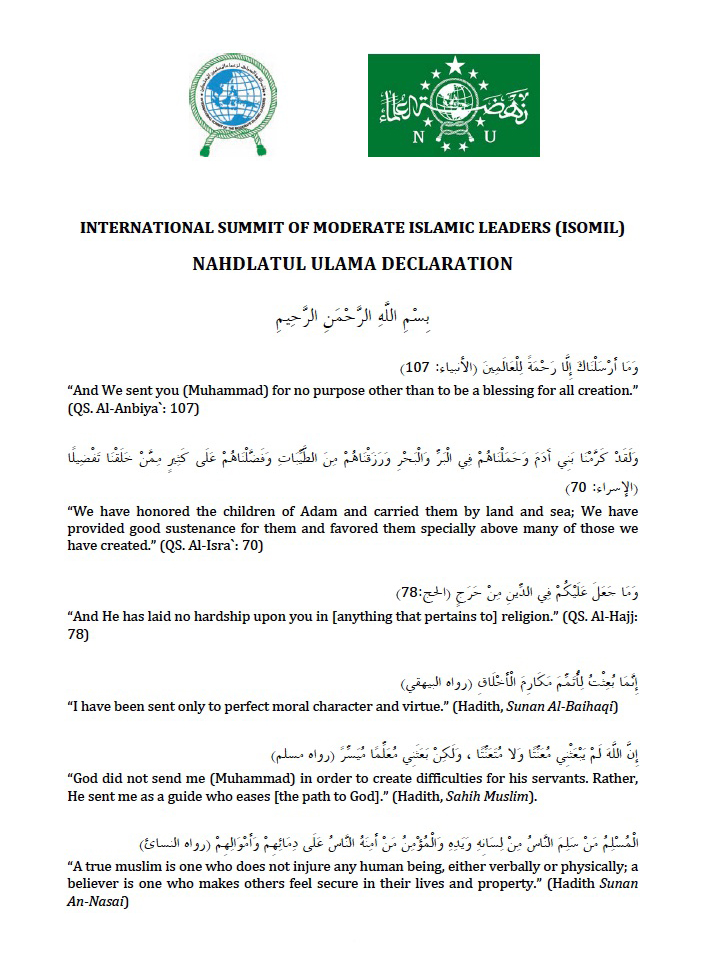 Widely covered by international media, the Summit and NU Declaration explicitly identified “specific modes of interpreting Islam as the most significant factor causing the spread of religious extremism among Muslims” (point 8); cast a spotlight on Saudi Arabia, Qatar and Iran for their role in having “weaponiz[ed] sectarian differences… nurtured religious extremism, and stimulated the spread of terrorism throughout the world” (point 9); identified religious extremism and terror, among Muslims, as “directly contributing to the rise of Islamophobia throughout the non-Muslim world” (point 10); called upon “people of good will of every faith and nation to join in building a global consensus not to politicize Islam” (point 15); and explicitly affirmed that the NU “will strive to consolidate the global ahlussunnah wal jamaah (Sunni Muslim) community, in order to bring about a world in which Islam, and Muslims, are truly beneficent and contribute to the well-being of all humanity” (point 16). 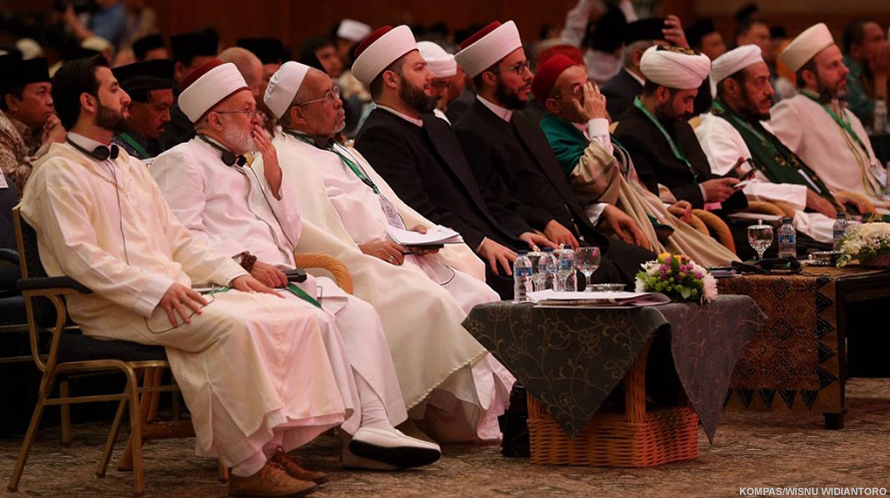 “The summit, attended by 300 Muslim leaders from more than 30 countries, is part of NU’s global campaign to promote Islam Nusantara [East Indies Islam] as an antidote to extremist ideology and jihadism.

“NU’s Supreme Council general secretary, Yahya Cholil Staquf, believes the event will be historic because it will discuss frankly the links between terrorism and Islam.

“Yahya, whose family has produced kiai (Islamic scholars) for generations, is shocked by the argument often presented in the West that Islam has nothing to do with extremism and terrorism.

“He says provisions within fiqh (Islamic jurisprudence) allow for slavery and executions. It is from these medieval interpretations of Islam that the so-called Islamic State and al-Qaeda draw justification for their actions.

“’If we may implement without questioning any provision of fiqh… then we may… butcher people according to the rules of fiqh that still exist today,’ Yahya says. ‘This is a problem.’

“At an event parallel to this week’s NU summit, Ansor [the NU’s youth movement] will issue a declaration calling for the ‘renovation’ of Islamic jurisprudence that discriminates against non-Muslims.

“Ansor’s global unity forum will highlight the fact that elements within classical Islamic law explicitly enjoin discrimination against certain classes of human beings on the basis of religion,” says C. Holland Taylor from the LibForAll Foundation, a non-profit organisation fighting for tolerant Islam which he co-founded with former Indonesian president and NU leader Abdurrahman Wahid in 2003.

“Ansor will issue a call to ulama (Islamic scholars) to examine the problems humanity is facing and see how they are connected to Islamic law and teachings and how these might be reconceptualised.” Read the full article (PDF).

Acknowledging the event’s global significance, the Associated Press (AP) designated ISOMIL “The Big Story” of Monday, May 9. This resulted in coverage by hundreds of media outlets throughout the United States and internationally, ranging from the New York Times, Washington Post, Daily Mail and Hindustan Times to local newspapers, radio and television stations across the U.S.

“Islam Nusantara emerged through the fusion of pre-existing cultures and traditions in the East Indies archipelago with [the spiritual essence of] Islam, and has a powerful, synergetic relationship with Indonesian nationalism,” NU Chairman Kyai Haji Said Aqil Siradj told journalists at a heavily-attended press conference following the summit’s closing ceremony. “Conference participants reacted favorably to Islam Nusantara, even though yesterday [in the opening speech] I firmly stated that the main problem in conflict-prone Middle Eastern countries is the lack of mutual acceptance and synergy between ulama (religious scholars) and nationalists,” said Said. 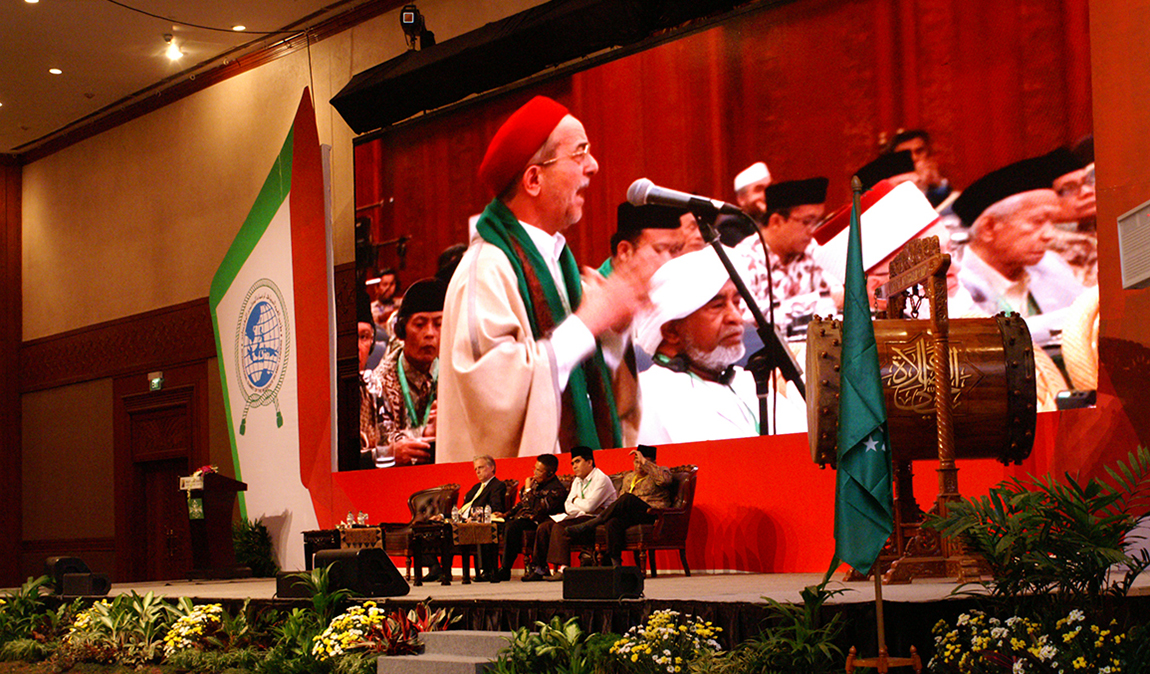 “Islam of the Archipelago leads way to moderation”

Points 1 – 3 of the ISOMIL Nahdlatul Ulama Declaration affirm that it is legally permissible, within Islam, to employ widely varying cultural and artistic modes to express and convey the essential (spiritual) teachings and values of Islam. This traditional Sunni view of Islam rejects extremist efforts to annihilate cultural diversity throughout the Muslim world, and impose a monolithic Wahhabi interpretation of Islam upon Muslims and non-Muslims alike. The Declaration encourages others to embrace “a salutary paradigm of Islam in which religion contributes to civilization, by respecting pre-existing cultures and prioritizing social harmony and peace.”

Point 4 affirms the religious legitimacy of nation states, and the virtue of patriotism—thereby rejecting the claim that Muslims have a religious obligation to establish an Islamic Caliphate, a key goal of not only jihadi movements, but also “non-violent” extremist groups such as the Muslim Brotherhood.

Point 5 rejects ISIS and al-Qaeda’s call for global conquest, and instead asserts that Islam enjoins its adherents “to engage in the continuous development of akhlaqul karimah, or noble character and virtue, for it is only through akhlaqul karimah that Islam can manifest as Divine Grace for all creation.”

Point 8 identifies “specific modes of interpreting Islam (tafsir) as the most significant factor causing the spread of religious extremism among Muslims.”

Point 9 states that “various governments in the Middle East” [viz., Saudi Arabia, Qatar and Iran] “have deliberately nurtured religious extremism, and stimulated the spread of terrorism throughout the world.”

Point 10 identifies Islamist extremism as the primary cause of a rising tide of Islamophobia in the West.

Point 11 states that “Certain governments in the Middle East derive their political legitimacy from precisely those problematic interpretations of Islam that underlie and animate religious extremism and terror. These governments need to develop an alternate source of political legitimacy if the world is to overcome the threat of religious extremism and terror.”

Point 12 states that “The Nahdlatul Ulama is prepared to help in this effort.”

Point 14 “urges the Indonesian government to play an active and constructive role in seeking a resolution to the multi-faceted conflicts raging in the Middle East,” in conjunction with the Nahdlatul Ulama.

Point 15 “calls upon people of goodwill of every faith and nation to join in building a global consensus not to politicize Islam, and to marginalize those who would exploit Islam in such a way as to harm others.”

Point 16 commits the Nahdlatul Ulama to “consolidate the global ahlusunnah wal jamaah (Sunni Muslim) community, in order to bring about a world in which Islam, and Muslims, are truly beneficent and contribute to the well-being of all humanity.”

Read the full text of the ISOMIL Nahdlatul Ulama Declaration and view sample media coverage of the event.

JAKARTA, INDONESIA: On May 12, 2016, Muslim, Christian, Hindu, Buddhist and Jewish leaders gathered to attend a Global Unity Forum co-sponsored by the world’s largest Muslim youth organization, Gerakan Pemuda Ansor, and Bayt ar-Rahmah. At the Forum’s conclusion, GP Ansor issued a 3-page declaration that includes “The GP Ansor Call… for an end to conflict in the name of religion, and for qualified ulama (Muslim religious scholars) to carefully examine and address those elements of fiqh (classical Islamic law) that encourage segregation, discrimination and/or violence towards those perceived to be ‘non-Muslim.’” 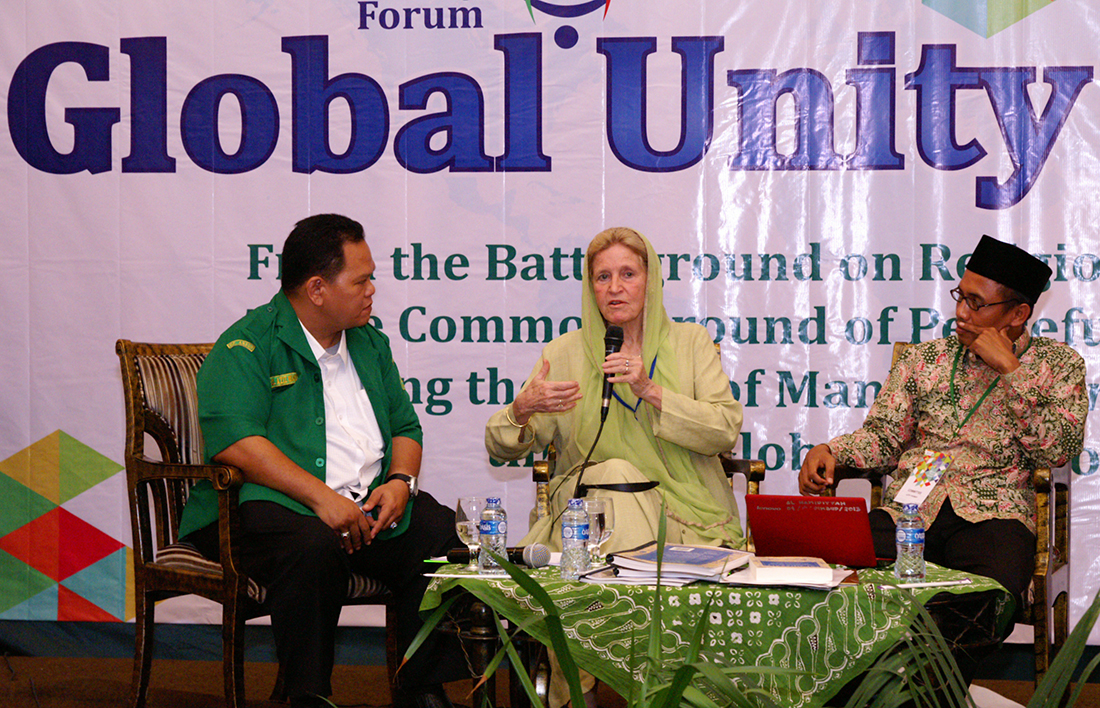 As KH. Yahya Cholil Staquf explained in his opening address, the Global Unity Forum was held as a direct follow up to the International Summit of Moderate Islamic Leaders (ISOMIL) and the Nahdlatul Ulama Declaration, which was promulgated on May 10, 2016. “In its declaration, the NU firmly and honestly identified the salient factors most responsible for the emergence of this global crisis—i.e., factors rooted within specific elements of Islam itself…. [The] Forum convened today—by GP Ansor and the Nahdlatul Ulama—represents a decisive “first step” that demonstrates the NU is moving forward to implement its strategy. We shall not stop halfway nor abandon this path before we have reached our goal. We shall not return home [from the field of battle] until victory is in our hands.”

As the public declaration issued at the Global Unity Forum states: “If we wish to end the primordial cycle of violence in the name of religion, we must acknowledge that many orthodox religious traditions encourage their adherents to practice self-segregation and, often, to discriminate against others. Such teachings are deeply embedded within classical Islamic law (fiqh) itself… We cannot shield Muslim youth from the siren call of ‘violent extremism’ without altering our very perception of religion itself, and the obligations that it imposes upon us.”

According to senior NU and Ansor leaders, the declaration issued at the Global Unity Forum provides the requisite theological grounds to summon an international gathering of Muslim scholars (bahtsul masa’il), whose deliberations are expected to establish a road map for the reform of classical Islamic law, in order to meet the needs and circumstances of Muslims living in the 21st century. 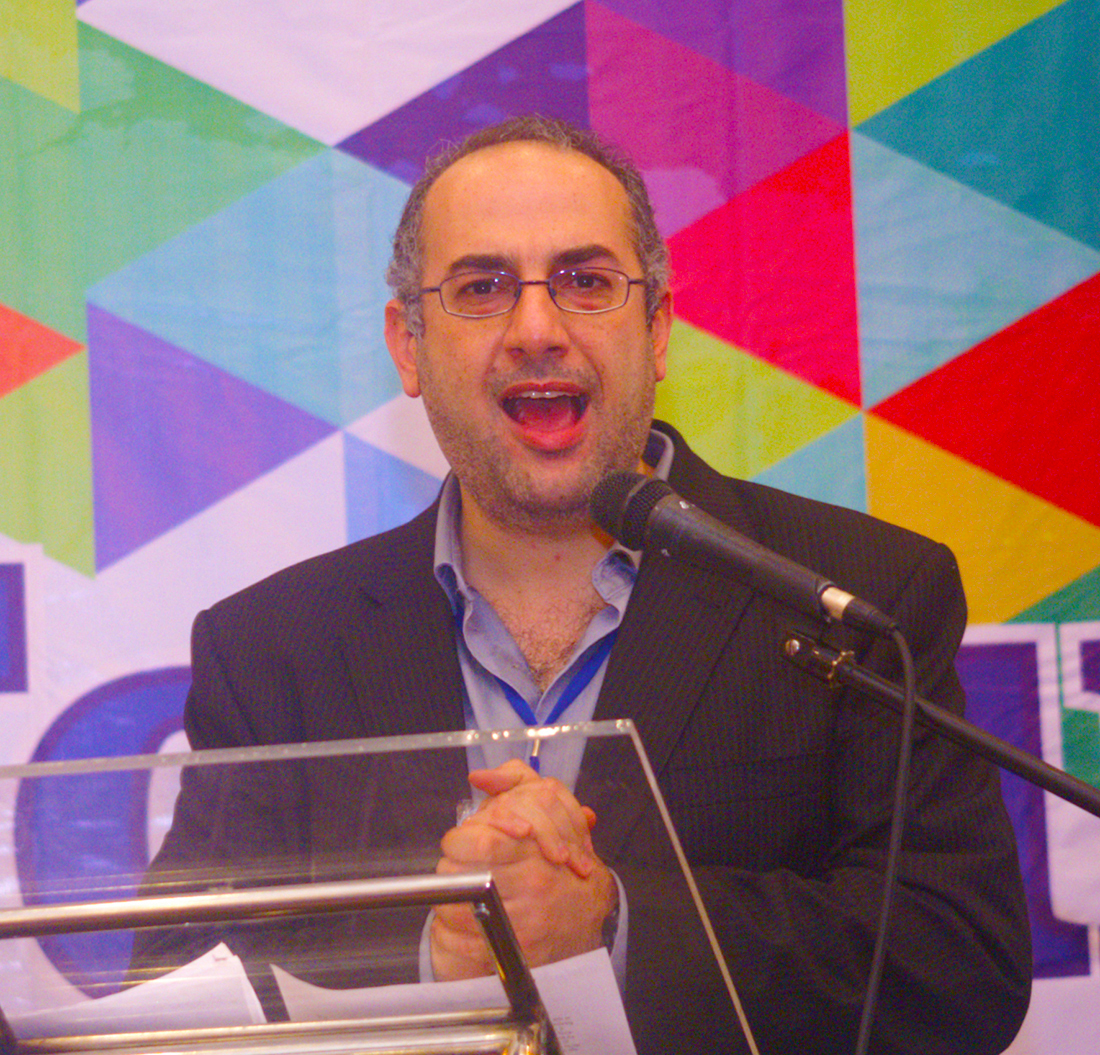 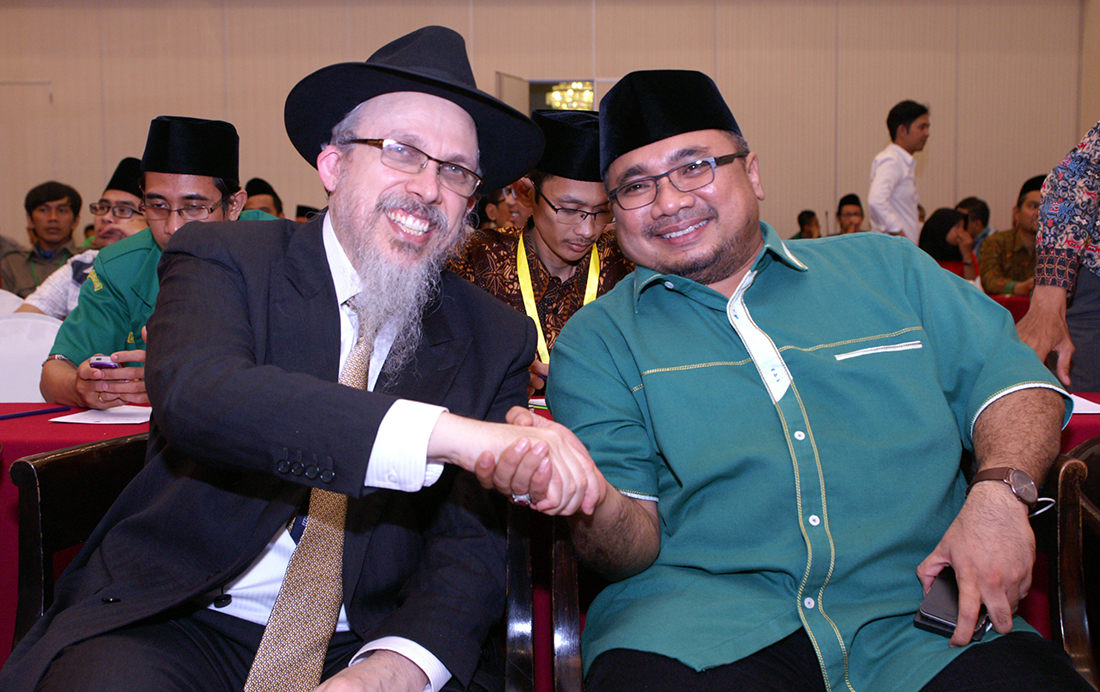