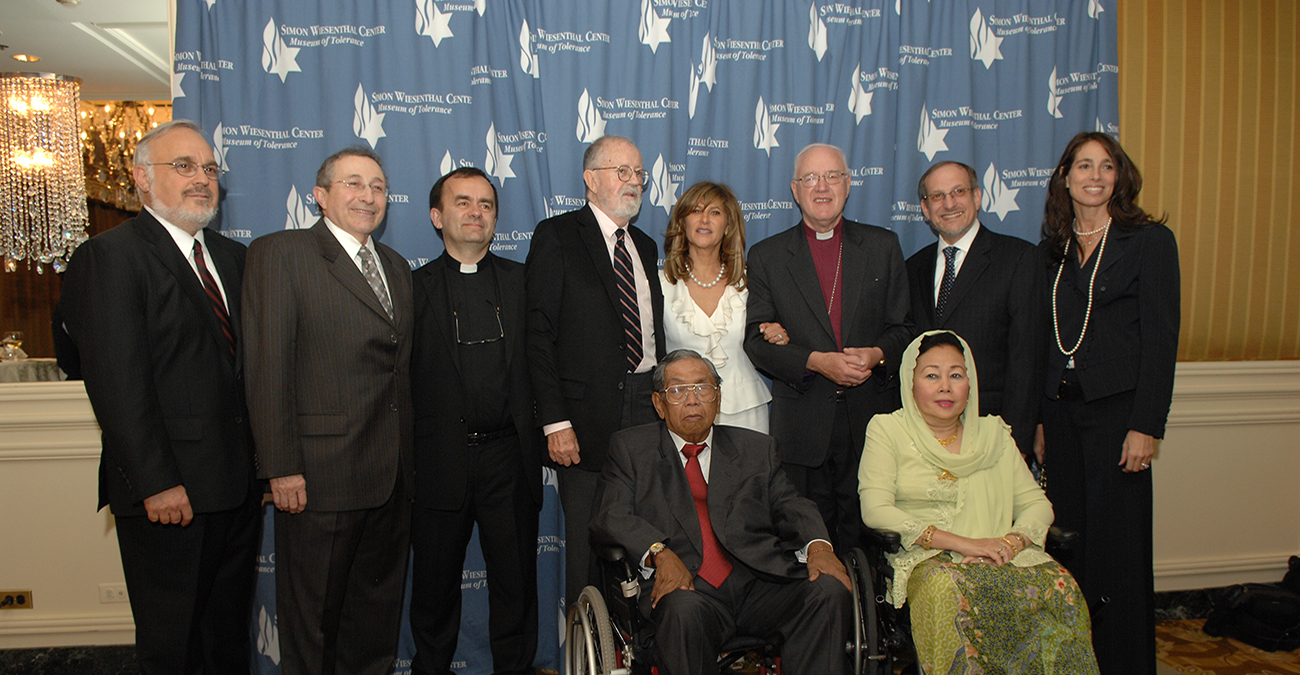 LOS ANGELES and WASHINGTON, May 7, 2008 — “As much of the world clamors for a moderate Muslim voice to speak out against extremism and violence in the Middle East and globally, Indonesia’s first democratically elected President, His Excellency Kyai Haji Abdurrahman Wahid, last night outlined his views on promoting peace by exporting pluralistic and tolerant forms of Islam to the Middle East.

“‘Rather than view Israel and Jews through a politicized lens of religious hatred and violence, we must help Muslim populations—not only in Palestine, but throughout the Arab world—rise to embrace a profoundly spiritual and tolerant understanding of Islam, and a humanistic attitude towards the Israeli-Palestinian conflict,’ said President Wahid.

“President Wahid’s comments came during a rare visit to the United States to accept The Simon Wiesenthal Center’s Medal of Valor for his leadership of the LibForAll Foundation and his efforts to combat Holocaust denial in the Muslim world.”  ~  Reuters/Los Angeles Times 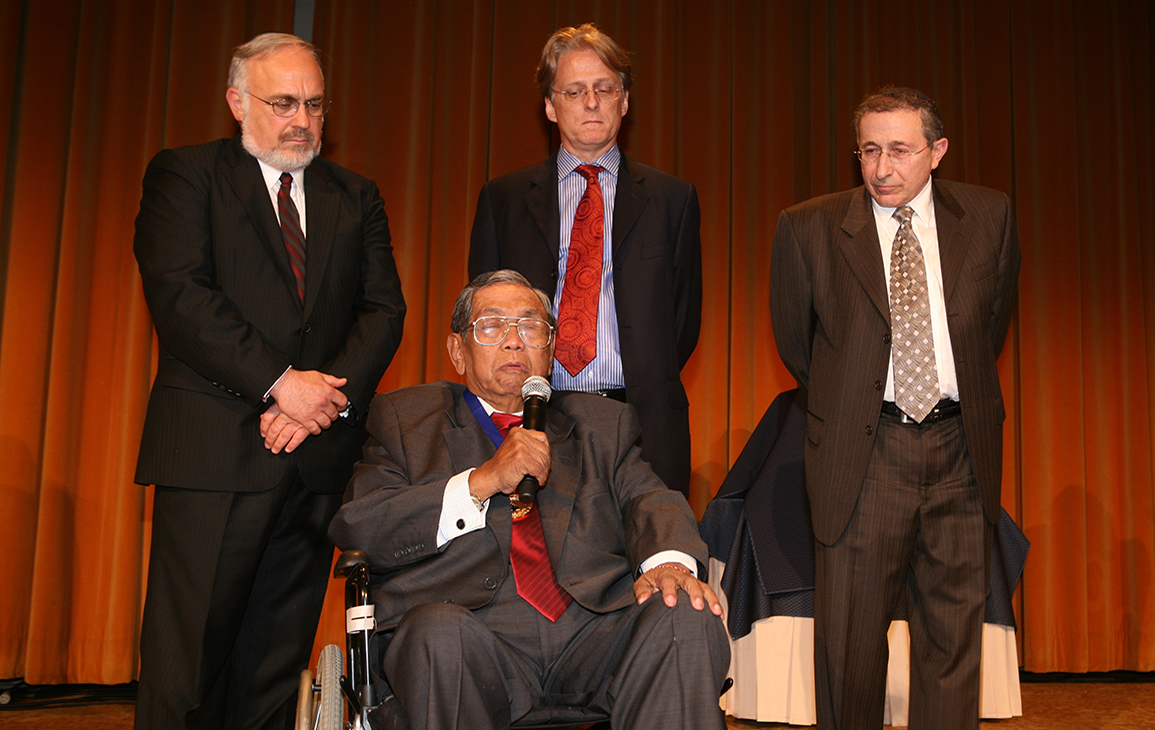 Actor Will Smith was one of the hosts for the Wiesenthal Center Tribute dinner, held at the Beverly Wilshire Hotel in Beverley Hills, California.

The audience of over 900, including many of Hollywood’s elite, gave a prolonged standing ovation to President Wahid, with much of the audience moved to tears.

“In its telling, the story of a notorious lynching of Jews is not unusual. The storyteller, however, is: Abdurrahman Wahid, the former Indonesian president, and a leading Muslim scholar, visiting the U.S. to preach his message of Muslim tolerance, revealed the root of his understanding of the risks and perils of Jewish existence. 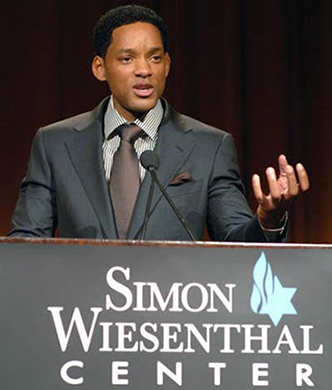 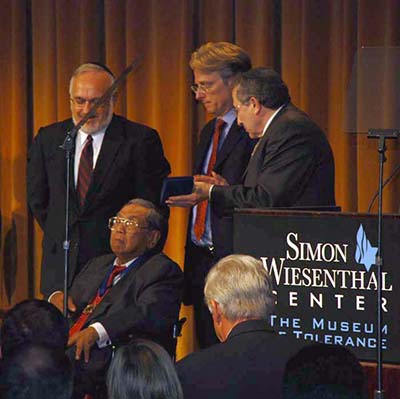 “Wahid was a 29-year-old student at Baghdad University in 1966, earning his keep as a secretary at a textile importer, when he befriended the firm’s elderly accountant, an Iraqi Jew he remembers only by his family name, Ramin. “I learned from him about the Kabbalah, the Talmud, everything about Judaism,” Wahid recalled of the four-year friendship that included long lunches, quiet walks and talks at the city’s legendary Hanging Gardens.

“In 1968, the Iraqi government effectively had come under the control of Saddam Hussein, whose title at that time was deputy to the president, Ahmad Hassan al-Bakr.

“At Saddam’s behest, Iraqi courts had convicted 14 Iraqis—nine of them Jews—on trumped-up charges of spying for Israel, and they were hanged that day in Baghdad’s Tahrir Square, just steps away from where the textile firm had offices.

“Ramin came to his friend Wahid and wept, wondering what would become of Iraq’s ancient Jewish community.  “I said, ‘This is not only your fate, it is my fate,’” said Wahid, now frail and in a wheelchair.  Wahid said he decided then that “the Islamic people should learn” about the Jews and their faith.

“Ramin’s worst fears were realized: The community that dated to the Babylonian exile heard Saddam’s message loud and clear, and by the early 1970s it had dwindled to barely a hundred Jews. By 2007 there were less than 10, according to media accounts.

“Wahid, however, made good on his pledge…. The apex of this effort, conducted jointly with the LibForAll Foundation, a group that promotes moderate Islam, and the Simon Wiesenthal Center, was the Holocaust conference last year in Bali, Indonesia.” ~ Jewish Telegraph Agency 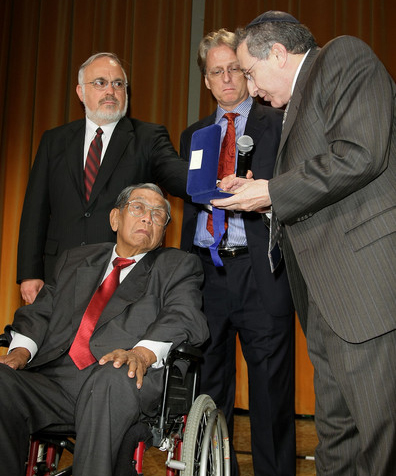 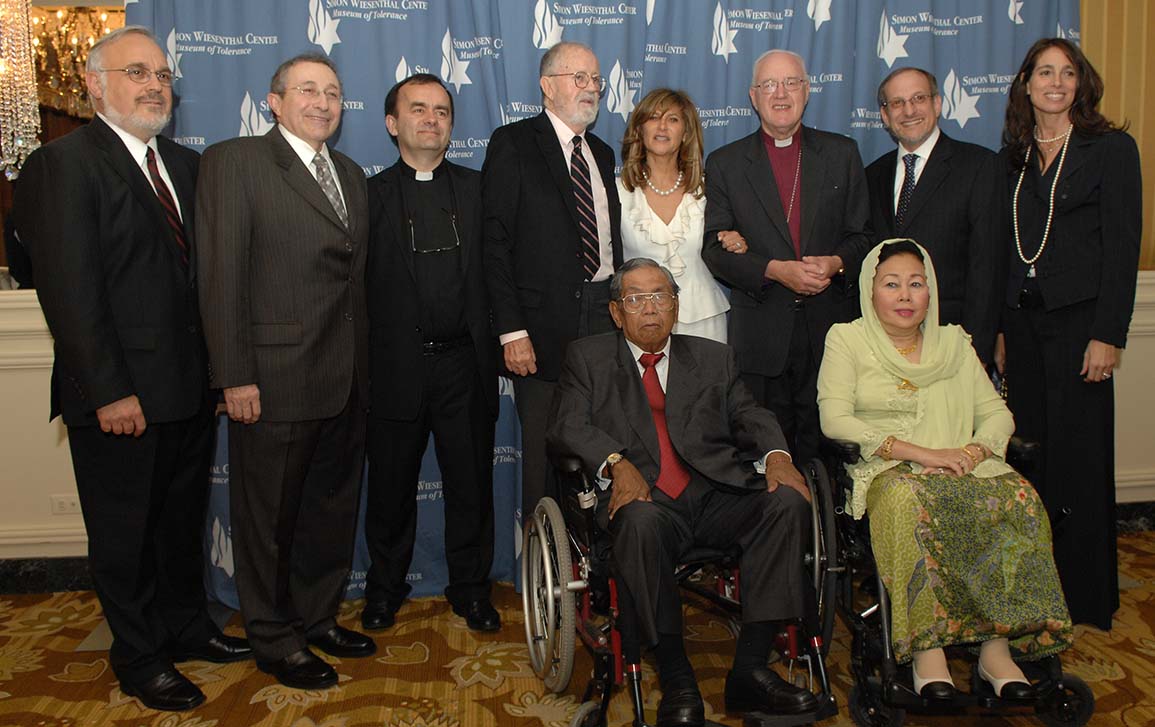 Washington activities included dinners in honor of President Wahid at the Rayburn House Office Building (sponsored by Congressman Robert Wexler and the American Jewish Committee), and at the Indonesian ambassador’s residence; meetings with Congressmen, Senators and various think tanks; a meeting in the West Wing of the White House with Vice President Dick Cheney; and a private briefing with members of the DC press corps (left), which generated national and international coverage of President Wahid’s visit. 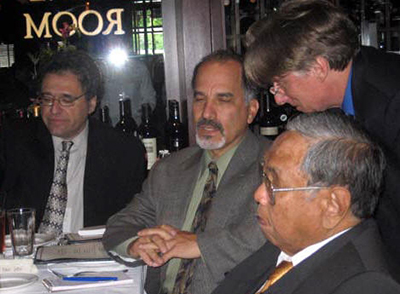 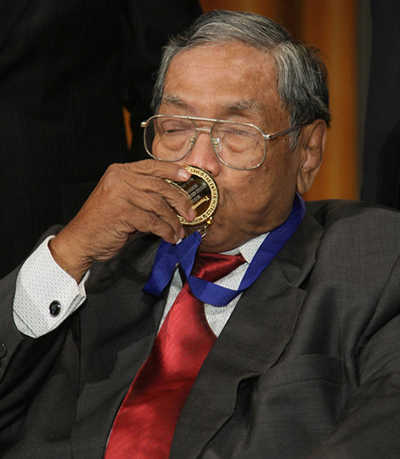 “U.S.officials—from the Bush administration to Congress to the Pentagon—have been struggling to build a strategy to counter radical Islamists. So it’s no wonder that the former president of Indonesia, Abdurrahman Wahid, was much sought after by top lawmakers, senior White House officials, and other policy makers when he visited Washington in May. Wahid, who led the world’s largest Muslim nation from 1999 to 2001, has been promoting a message of tolerance and democracy. He is a strong supporter of Israel, and last [month], the Simon Wiesenthal Center in Los Angeles awarded a medal of valor to Wahid for his highly public stance in condemning Iranian President Mahmoud Ahmadinejad as a liar for denying the Holocaust. Wahid was accompanied in Washington by C. Holland Taylor, founder of the LibForAll Foundation, which works globally to promote the message of moderate Islam.” ~ Bob Gettlin, National Journal

We are pleased to offer a rare opportunity to meet and discuss with the former President of Indonesia, H.E. Kyai Haji Abdurrahman Wahid, what works to curb radical Islam in South East Asia and how and if this strategy is transferrable elsewhere in the world….

“On Wednesday, May 8th at 4:45 p.m., we invite you and key staff and Hill leadership to join us in Room S-207, the Mansfield Room, where we can hear why the Wall Street Journal has called President Wahid “the single most influential religious leader in the Muslim world,” and “easily the most important ally the West has in the struggle with radical Islam”….

“We trust you can use this opportunity to gain a greater understanding of the importance of efforts LibForAll is undertaking to confront radical Islam.” 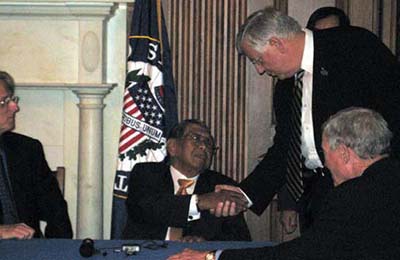 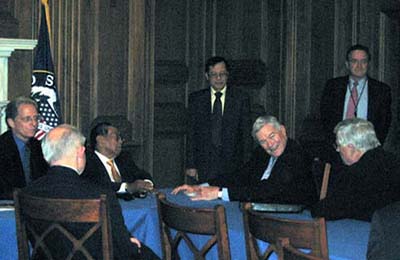 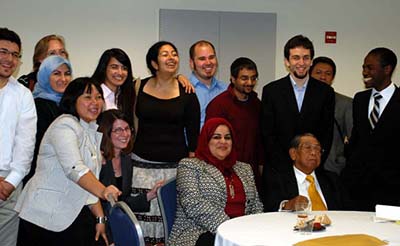 President Wahid and LibForAll CEO Holland Taylor also participated in an event co-sponsored with the American Islamic Congress’s Project Nur program, speaking directly to young Muslims at George Washington University, where they discussed the need for moderate Muslims to combat extremism by promoting a pluralistic and tolerant understanding of Islam.

“Muslims themselves must propagate an understanding of tolerant Islam and work to discredit extremist ideologies. Accomplishing this task requires the understanding and support of like-minded individuals, organizations and governments throughout the world,” said President Wahid. “The American Islamic Congress, through its Project Nur program, does just that by engaging young Muslims in promoting responsible leadership and interfaith understanding without the cloud of extremism and hatred.” ~ Reuters/Los Angeles Times

“‘Don’t give any kind of recognition to the fundamentalist view of Islam,’ Wahid said. ‘The Saudis have a double-pronged thing: the first is to give assistance to fundamentalists, on the other side to show the ‘humanist’ side of Islam. These things cannot be reconciled.’” ~ Ron Kampease, Jewish Telegraph Agency 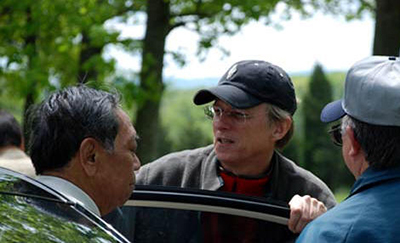 President Wahid also toured the Civil War battlefield at Gettysburg, Pennsylvania, to study the lessons of American history. He and LibForAll CEO Holland Taylor—a North Carolina native whose ancestors fought at Gettysburg—visited key sites including Seminary Ridge, the Peach Orchard, the Wheatfield, Devil’s Den, Little Roundtop and Cemetery Ridge. Asked what he learned there, President Wahid replied, “The importance of acting decisively in a time of crisis,” and “the effect that a few men of courage can have upon human destiny.”