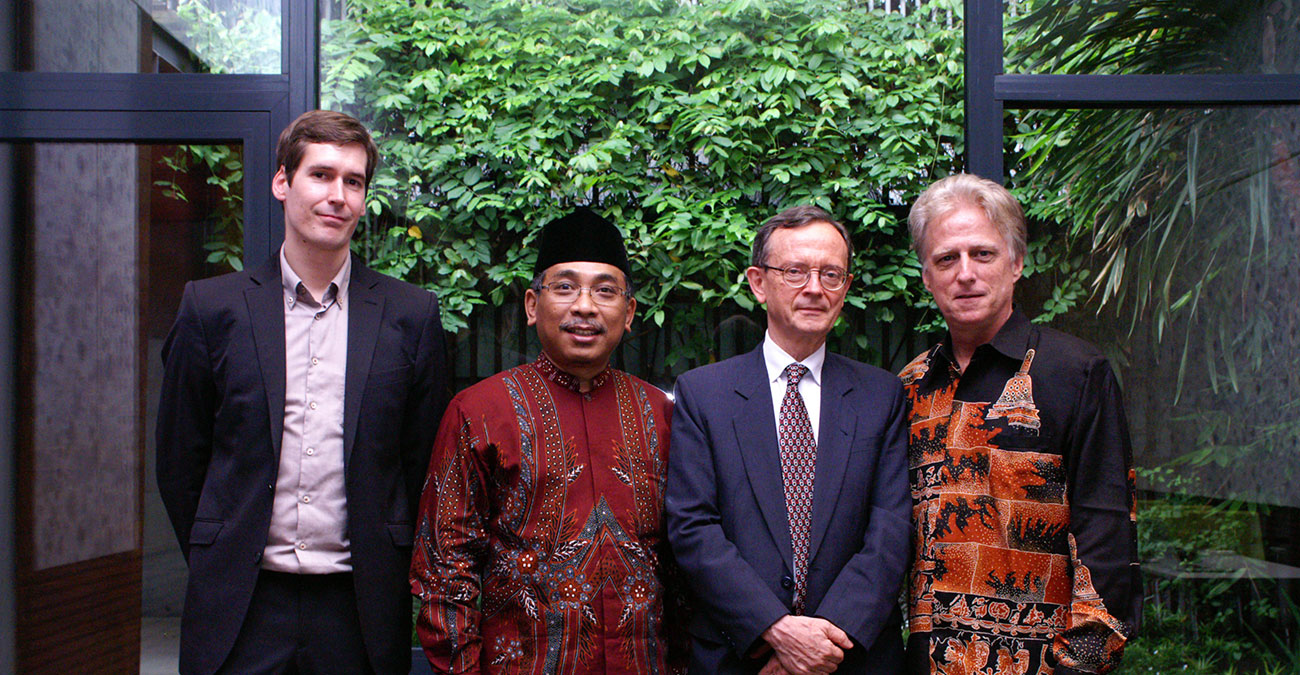 Vienna Observatory for Applied Research
on Terrorism and Extremism (VORTEX)

Islamist movements such as al-Qaeda, ISIS, the Muslim Brotherhood, Hizb ut-Tahrir and Boko Haram share a common ideology, which constitutes a very real and rapidly evolving threat not only to international peace and security, but also to the noble values of religion itself. In response, renowned Muslim theologians from the Nahdlatul Ulama (NU) have joined world-class scholars from the University of Vienna’s Institut für Orientalistik, to create the Vienna Observatory for Applied Research on Terrorism and Extremism (VORTEX). Dr. Rüdiger Lohlker, a senior professor of Islamic Studies at the University of Vienna and respected counter-terrorism advisor to the European Union and various Western nations, heads VORTEX, along with research fellows Dr. Nico Prucha and Dr. Ali Fisher. LibForAll Foundation has worked closely with Dr. Lohlker since 2014.

This strategic initiative is designed to produce academically rigorous applied research concerning the ideology of religious hatred, supremacy and violence that underlies and animates Islamist terrorism, and contribute to developing the societal consensus, and sound government policies, that are necessary to marginalize, discredit and defeat Islamist extremism, which is contributing to the rise of Islamophobia throughout the non-Muslim world.

These organizations include Bayt ar-Rahmah li ad-Da‘wa al-Islamiyah Rahmatan li al-‘Alamin (Home of Divine Grace for Revealing and Nurturing Islam as a Blessing for All Creation); LibForAll Foundation and its International Institute of Qur’anic Studies (IIQS); Markaz al-Islam al-Mo’asser (the Center for Contemporary Islam, or CCI); and Majma’ Buhuts an-Nahdliyyah (the Forum for NU Religious Teachings, or MBN)—which are active on four continents and have been the subject of extensive international media coverage, as well as counter-terrorism research conducted by the Center for Asymmetric Threat Studies at Sweden’s National Defense College, among others.

Based in Indonesia, the NU is the world’s largest Sunni Muslim organization, with over 50 million members, 14,000 madrasahs and a rich, longstanding and well-documented tradition of promoting tolerance, pluralism and mutual respect among those of different faiths. In 2009, senior NU theologians—in conjunction with top leaders of the Muhammadiyah, the world’s second-largest Muslim organization—published a landmark book entitled The Illusion of an Islamic State, which the Wall Street Journal described as “pioneering” and the Washington Post hailed as “remarkable… a roaring success.” In his introduction to the book, President Wahid wrote:

“People who are convinced that they know more than anyone else about Islam, and yet are full of hatred towards any of God’s creatures who do not travel the same path as they; and those who claim to be in possession of the absolute truth, and for that reason entitled to act as God’s vice-regents on earth (caliphs) and to dictate how everyone else must live—clearly, their words and behavior will not lead us into the presence of God. Their dream of an Islamic state is merely an illusion, for the true islamic state is not to be found in the structure of any government, but rather, in hearts which are open to God and all His creatures.” 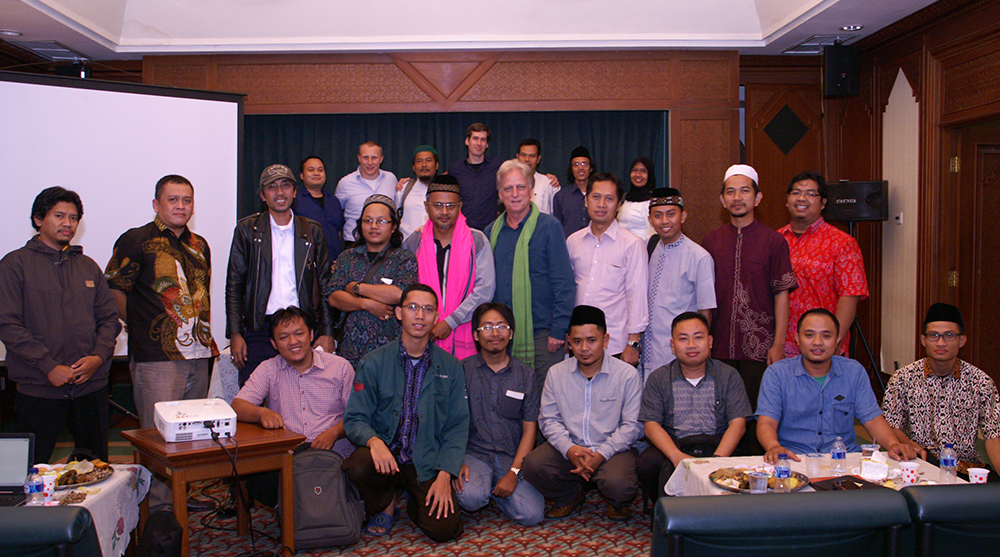 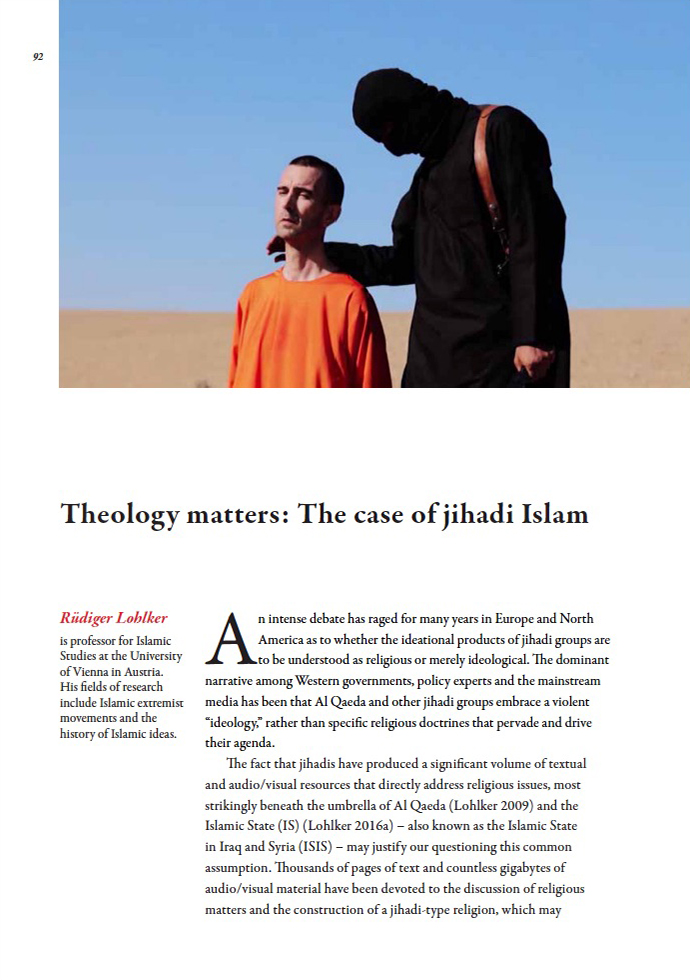 As C. Holland Taylor, Chairman & CEO of LibForAll/IIQS, has observed: “Our ability to dissuade hard-core extremists is limited. Rather, our strategic goal is to mobilize the vast, silent majority of Muslims who reject extremism. When mobilized, this ‘silent majority’ has the ability to isolate extremists. Mainstream Muslims can exert social pressure in millions of unique interactions, that peel away less committed rank and file extremists, isolating Islamist leaders and leaving them with a small and shrinking band of hard core followers, while providing government actors (i.e., security services, ministry officials, etc.) with the public support required to deal effectively with these remnants.”

The historical experience of Islam in Indonesia, and the nation’s long tradition of religious tolerance—as conveyed by the term Islam Nusantara—are essential elements of this work, which seeks to encourage and widely disseminate the view that Islam’s primary message is one of universal love and compassion (rahmatan li al-’alamin).

“VORTEX is a project of a research group at the University of Vienna doing research on online Jihadism for many years now and cooperating with the LibForAll Foundation (Jakarta, Winston-Salem, etc.) and the world’s largest Muslim organization, the Nahdlatul Ulama (NU), with around 70 million followers and members.

“The profile of NU may be described as a mass organization well rooted in a regional Islamic tradition that is totally different from the varieties of Islam dominant in the Arab world, esp., those influenced by Wahhabism and Salafism. This Southeast Asian Islam, called Islam nusantara, shows some characteristic traits. It is based on an understanding of Islam that is pluralistic within Islam and tolerant towards other world-views, favors democracy as a way of organizing a state, rejects the idea of an Islamic religious state and adheres to the idea of a secular nation state. This characterization of Islam nusantara is an ideal type but aptly describes the idea of what the Southeast Asian variety of Islam tries to be.”

~ Rüdiger Lohlker, “Rewiring the Islamic Net: Creating an Alternative to the Online Propaganda of IS (Islamic State),” The Future Information Society: Social and Technological Problems

As stated in the Nahdlatul Ulama Declaration, promulgated at the International Summit of Moderate Islamic Leaders (ISOMIL) held May 9 – 11, 2016 in Jakarta, Indonesia:

“The idea behind VORTEX is to take into account that a sustainable competition with religiously legitimated extremism has to be built on a thorough religious understanding that is competing with, e.g., the IS version of Islam: pluralistic religion vs. religious totalitarianism, tolerance accepting the other vs. exclusivism negating the other, democratic law-making by humans vs. so-called law of God, secular nation state vs. Islamic state.

“The ultimate aim of VORTEX is to reclaim the Web from extremist propaganda.”

~ Rüdiger Lohlker, “Rewiring the Islamic Net: Creating an Alternative to the Online Propaganda of IS (Islamic State),” The Future Information Society: Social and Technological Problems

The government of Austria—through the Austrian Ministry of Interior—has provided direct support for the creation of VORTEX, which both Western and Arab media outlets have hailed as a strategic initiative of global significance, with the potential to serve as an example of best practice for Western governments and intergovernmental organizations, such as the United Nations and the Organization for Security and Cooperation in Europe (OSCE).